D’land and the unstoppable rain – Magazines 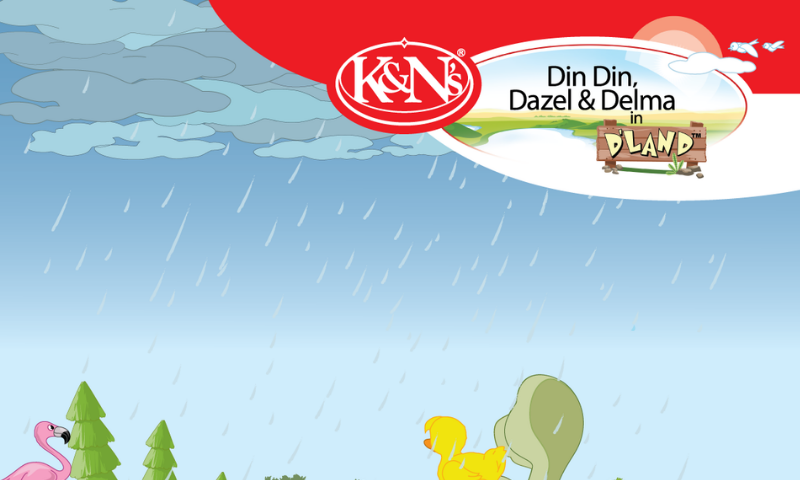 Let’s find out what Din Din, Dazel and Delma are up to this week.

“Oh my god! It’s raining,” shouted Dazel the duck, as the first drops of rain hit the pond making gentle circles of water around her. Swain the swan and the families of frogs that lived in the pond also started cheering as the rain started to fall faster.

D’Land’s animals and plants savored the rain; it always brought with it freshness and left in its wake greenery and prosperity. The animals bathed while the plants eagerly drank the cool water falling from the sky.

That night, the rain continued to fall on D’Land. The sky was lit up with lightning and thunder rumbled.

Delma couldn’t sleep that night. She was worried. The rain lasted all day and even overnight. The lake had begun to fill. In the middle of the night, Delma could see that the banks of the lake were beginning to overflow.

“It has never rained like this before, since I came to D’Land,” thought Delma the dolphin. As the sun began to rise in the morning, the sky was still covered in furious gray clouds and the rain continued to fall.

Din Din was safe in his Fruit Park cave but he was worried about his friends Dazel and Delma.

“Mom, I’m going to see how Delma and Dazel are doing,” Din Din told his mother.

“But Din Din, it’s raining so hard. You’ll definitely catch cold. Please stay home by the bonfire I made,” his mother protested.

“Mother, I have a feeling that Delma and Dazel are in trouble. It has been raining nonstop for a whole day and night. I’m afraid the lake and pond have overflowed,” Din Din pleaded. His mother knew he couldn’t rest until he made sure his friends were safe, so she agreed to let him go.

Din Din stomped in ankle deep water as he made his way to the pond where Dazel lived. He saw that the animals in the pond were now shivering with cold. Wiz Rooster was telling them all to get into his treehouse.

Din Din saw Dazel walking towards him. “Din Din! How are you. Why did you come here from Fruit Park in all this rain?” Dazel asked.

“I was worried about you, Dazel. But I’m glad to see you’re all going to take refuge in Wiz Rooster’s treehouse. You’ll be safe here until the rain stops,” replied Din Din. “But what about Delma?” Where will she and all the animals in the lake go to shelter?

“You’re right Din Din,” Dazel said anxiously. “Let’s go see the state of the lake.” So Din Din and Dazel headed for the lake. They were dismayed to see that the shore of the lake overflowed heavily. The heavy torrents of water carried away the family of beavers. Bea the beaver and her family tried to cling to the trunk of a fallen tree. Din Din moved quickly to help him. He pulled her and her beaver children out of the rushing water and helped carry her to a nearby tree.

Bea and her family cried with relief and thanked Din Din profusely. It was then that Dazel saw Delma. The dolphin was trying to swim against the current of the lake water. When Delma finally reached the overflowing bank, the three friends hugged in relief.

“Oh Delma, we were so worried about you,” cried Din Din as the three friends continued to hold each other in the falling rain.

“Yes, I was worried about all of you too. Oh, what’s going to happen? The shore of the lake is going to overflow and take away all the aquatic animals.

At that time, Wiz Rooster flew past them and landed on a rock near the lake. The rooster’s feathers were also soaked. “We have to build a barrier around the lake otherwise this whole area will be flooded,” said Wiz Rooster.

“But how are we going to do it? The lake is so huge! cried Din Din.

“We’ll have to do this – working together,” urged Wiz Rooster. “Dazel gather as many strong animals as possible near the lake. Also, ask the smaller animals to find shelter. Din Din, we will need strong creatures so please go summon as many dinosaurs as possible. Delma asks all the aquatic creatures to help you, especially the beavers because they have experience in building dams and call Olly the octopus.”

Dazel flew out to spread the message; Din Din rushed to call the dinosaurs for help as Delma soon arrived with Olly and a group of aquatic creatures. Soon, a horde of creatures rushed towards the lake. From elephants to horses; from dinosaurs to donkeys; from hippos to flamingos – all listened to Wiz Rooster’s instructions. “Gather as many rocks and logs together and let’s build a high barrier at the edge of the lake. The lake is huge and a lot of work needs to be done. It could take days if the rain doesn’t stop. But it needs to be done to save D’Land.”

All the creatures began to zealously collect logs and push rocks into nearby forests. Night was falling and only part of the dam was built at the end of the lake which overflowed the most.

“Let’s go home and rest and gather our energy for tomorrow,” said Olly the octopus.

“And hope and pray that the rain will stop tonight,” said Wiz Rooster solemnly.

That night, the pouring rain finally turned to drizzle. By sunrise, the rain had stopped and the sun was beginning to reveal itself in the cloudless sky. All was calm after the storm. D’Land’s creatures have all gathered at the edge of the lake. The ground was muddy and the lake seemed full and swollen.

Wiz Rooster told the animals, “The sun will shine brightly and its warmth will help dry out the soil. In the meantime, let’s all help each other rebuild our homes.”

Soon the land animals helped rebuild the nests of the birds whose homes had been swept away. Rabbits and moles helped dig trenches for standing water to drain into. At the end of the day, all the creatures were tired but relieved that the storm had passed.

Wiz Rooster spoke to the creatures before they all went home. “It was an ideal example of teamwork. We all helped each other and it helped us overcome this natural calamity. May this love and solidarity increase day by day.”

And the tired but happy creatures of D’Land cheered loudly.