Covering the Highly Anticipated Midterm Debates in the Midwest: A Journalist’s Diary 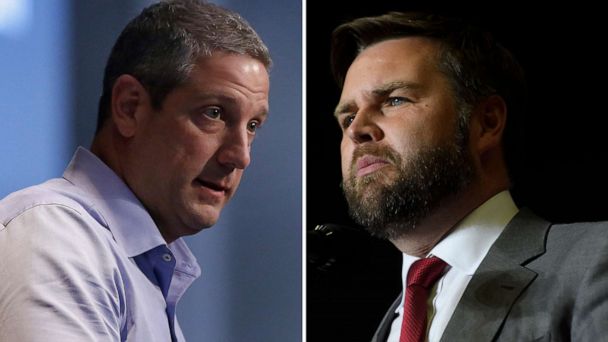 Paulina Tam is one of seven ABC News campaign reporters embedded in battleground states ahead of the November midterms.

Tam is based in the Midwest and had a busy schedule last week as the election season enters its final stretch with a series of anticipated debates. Below, she recaps her week.

From Sunday to Monday: launch of the “debate week”

As a student, you remember the finals week crunch. Campaign reporters like me cover something similar – “debate week”. I cover three states: Michigan, Ohio and Wisconsin. Many candidates that I am did it on stage last weekso it took a lot of preparation (mainly research, logistics and brushing up on my candidates’ positions on key issues) to put me in a good position to write and send out briefing notes to the many producers and media platforms. ‘ABC News ASAP.

(Luckily, I had a lighter assignment last Sunday night: watching a virtual fundraiser hosted by the Wisconsin Democratic Party that featured cast members from “Veep” and “The West Wing.”)

Senate races, in particular, are high stakes given that the chamber is currently split 50-50 and each contest has the potential to decide the balance of power in Congress.

I woke up early Monday morning and checked my credentials for the first Senate debate in Cleveland. I also went to fill up my car with gas. I knew my challenge in the next few days would be to stay focused on the laser but also pace myself, so I had enough “gas” to get through.

Arriving two hours before the Ohio debate gave me time to decompress slightly in the media room, which was perched above the news set. The shades were drawn to prevent taking photos and videos, but curiosity got the better of me. I looked over and saw Rep Ryan drinking from a glass of water.

Once the debate started, everything else was drowned out. It was just me, the debate program, and my transcription devices trying to keep up with the rat-a-tat of the candidates’ questions and answers. I also knew I had to stay nimble, so I used my iPhone to record the two gags after the debate was over.

I was writing my second note for the other ABC News teams when the room managers quickly ushered everyone out of the spin room.

I went back to my hotel to finish sending my notes. Before I knew it, it was early Tuesday morning.

Tuesday and Wednesday: On the track

The middle of the week was spent following the candidates on the road as they pitched their case to voters before and after taking the debate stage. Ryan had two back-to-back events (one in Canton and one in Akron), so my schedule mirrored his.

Ryan arranged a meeting with a few dozen supporters at an outdoor plaza in Guangzhou on Tuesday. They praised the congressman for a “job well done” the night before as Ryan tangled. After speaking with several participants, I conducted a brief interview with Ryan – what we call a “retreat” – and asked him about several moments of debate that needed clarification, in particular his comment about not wanting President Joe Biden to run again in 2024.

When asked if he would like anyone from their party to run in Biden’s primary if Biden were to run again, Ryan told me he was “not going to get into any of that” and that his main goal was to focus on his campaign.

Later Tuesday, at Ryan’s event in Akron, I met family members affected by the opioid crisis in the state. He hosted a roundtable with defenders, many of whom have already known Ryan for some time. Each attendee told the Congressman stories about the loss of loved ones and how they want to keep students safe in schools as an influx of so-called “rainbow” fentanyl pills has been seized by authorities in other parts of the country.

Then I followed Ryan to his campaign bus and along the way asked him about providing additional resources for those recovering from opioid addiction. When Ryan left, I went back inside to continue my conversations with family members, asking for more information about the work they are doing to commemorate their loved ones. Several defenders gave me brochures and photos of those they had lost. I now carry them with me in my backpack as a reminder of one purpose of reporting: to listen to and share people’s stories.

Back in Cleveland for the night, I prepared to do it all over again the next day with Barnes, the Democratic Senate nominee from Wisconsin.

After a few hours of sleep, I woke up at 4:30 a.m. Wednesday to catch an early morning flight to Milwaukee. The weather had changed and the sky opened up – pouring rain – with tornado sirens blaring as I arrived at the Barnes event, which was a stop on his ‘Ron Against Roe’ tour, where he speaks to voters in the. Johnson’s opposition to abortion access.

At the event, at a restaurant in West Allis, I ran into a Wisconsin resident whom I had previously met at another event in downtown Milwaukee.

When I was introduced to Mandi Miller of Wauwatosa in August, she was pregnant with her second child. When I saw her in the bedroom on Wednesday, Miller had dressed her gorgeous new child in a shirt with the words “Mandela Barnes” on it.

As with Ryan, I posed questions to Barnes – but this time in a press group, splitting my time with the other reporters on site.

That wasn’t all I had to work on: Correspondent Rachel Scott and her team were doing a file on the state of the race in Ohio, so I was helping them gather information as well as research locations for them to film. (As an ABC News integration, you serve all platforms, so when one or more knocks, you answer.)

Neither the Republican Senate candidates from Ohio nor Wisconsin had events on Tuesday and Wednesday. While I was hoping to spend more time with them on the trail during the week, I knew with Election Day looming, it was only a matter of time before I caught up with them again.

Thursday and Friday: No more confrontations

I was finally in the home stretch of debate week – although there were a few more later in the month. (Who counts ?)

Thursday saw an integrated team because I had two concurrent debates to cover, so my colleague Hannah Demissie, who usually covers the South, watched and reported on the Michigan Governor’s event.

I started my Thursday morning by covering a virtual press conference between Barnes and retired US Army Lt. Col. Alexander Vindman, who served in the Trump administration and was a key witness in the first trial. impeachment of the former president. Barnes and Vindman pushed back against GOP criticism of Barnes’ statements about policing by pointing to Johnson’s ties to Jan. 6, which Barnes underscored with a new campaign ad that day.

A House committee hearing on January 6 earlier this year January 6 text messages revealed in which Johnson’s head of state wrote to then-Vice President Mike Pence’s aide that “Johnson is to deliver … an alternate list of voters for MI and WI” to Pence in part of efforts to derail certification of Joe Biden’s victory over Trump.

Johnson insisted to ABC affiliate WISN in August that the Jan. 6 committee was doing a ‘grotesque misrepresentation’ and had ‘nothing to do’ with the fake voters and ‘virtually no involvement in efforts to send anything to Pence, adding that his participation “lasted seconds.”

After writing a note summarizing Barnes’ press conference – more an article for the ABC News website — Continued to prepare for the second and final Senate debate in Milwaukee.

I arrived at the scene nearly two hours before the showdown was to begin expecting Barnes supporters to be outside — and of course, like Wisconsin’s first Senate debate a week earlier, they were there, waving signs and chanting.

I interviewed a few participants and it was halfway through filming that I realized my fingers were going numb. Wisconsin fall and winter are no joke! I made a mental note to order gloves and hand warmers online.

Inside, the hour-long debate began and it flew off.

Interestingly, no one from the Barnes campaign came into the spin room, so I then asked a member of his team for his opinion. They said, “His debate performance speaks for itself!”

I ran (drove) to my hotel where I spent the rest of the evening writing debate notes and getting ready for the Wisconsin Governor’s Debate on Friday.

After a few hours of sleep, I woke up to get some coffee, put on some “war paint” (aka makeup), and joined an Instagram Live with the “Nightline” co-host Juju Chang to promote this week’s episode “Power Trip”. and give viewers a taste of my crazy week.

It warmed my heart to see Juju again. Did you know she was a presidential integration? She seriously did it all!

After a quick meeting with my embedded colleagues, I spent the rest of the afternoon prepping for the Governor’s Debate before heading to Madison where I caught some MOS – jargon for “man in the making” interviews. the street” – with several supporters of Governor Evers. .

I also saw the chairman of the Democratic Party of Wisconsin in the crowd, so I chatted with him about the state of the gubernatorial race and asked about whether any high-profile surrogates were coming to do campaign on behalf of the ticket. The president respectfully declined to confirm the names, but shortly afterwards said off-camera that former President Barack Obama was planning to visit Milwaukee later this month.

I immediately alerted my dev team and shortly after that email was sent, it was debate time. News of Obama’s visit would dominate the broadcast room later in the evening, with a surrogate for Michels, the Republican gubernatorial candidate, saying Democrats were “in trouble” because they were “taking out the big cannons”.

When the debate was over, I sent a final note to my colleagues, packed up my gear, and headed home for the night in Milwaukee. There, I read about the Michigan Governor’s Debate and finished my half-eaten breakfast sandwich – cold but still delicious, especially after an exhausting week.