Could the “peace talk” save the planet? 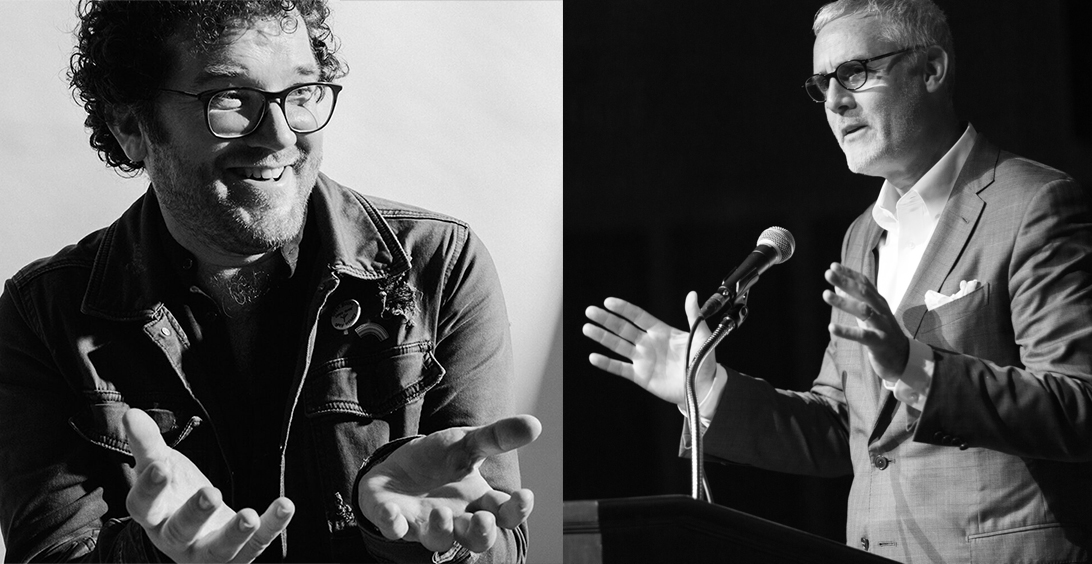 Could the “peace talk” save the planet?

Poet Padraig Ó Tuama (left; photo by Trevor Brady) and Columbia social psychologist Peter Coleman are teaming up to explore the power of language when it comes to promoting peace, security and sustainability through the world.

“Peace on Earth” is a popular sentiment this time of year, hung under window wreaths and scrawled on holiday greeting cards. But what exactly does peace look like on Earth, at a time when the planet is experiencing rising temperatures, declining biodiversity, water and air pollution, and violent land disputes? According to Columbia Climate School social psychologist Peter Coleman and award-winning poet Pádraig Ó Tuama, achieving peace, especially when dealing with planetary issues, has a lot to do with the language we use.

With support from the Morton Deutsch International Center for Cooperation and Conflict Resolution (MD-ICCCR), Teachers College, and Columbia University’s Climate School, Coleman and Ó Tuama are teaming up to explore the power of language when it comes to is about promoting peace, security and sustainability across the globe. Coleman, professor of psychology and education and director of MD-ICCCR, is a conflict resolution expert and publisher of the seminal textbook, Conflict Resolution Handbook: Theory and Practice (2014). Ó Tuama is a writer of poetry and prose, theologian, lecturer and community peacebuilder. Originally from Ireland, he was from 2014 to 2019 the leader of the Corrymeela community, Ireland’s oldest peace and reconciliation community.

From October 2021 to May 2022, Ó Tuama will be in residence in New York, working with Coleman and other collaborators from MD-ICCCR and the Climate School. The result will be the publication of an anthology of 35 poems exploring the major themes expressed in Coleman’s award-winning textbook, which covers conflict between individuals; group conflict; ambivalent responses to conflict; regression, aggression and resistance; cooperation and negotiation; as well as conflict as a state of existence in the current climate crisis.

“For me, theology, conflict and poetry are all about the use of words and the power of words,” Ó Tuama said. For years, advising both writers and community builders, he has emphasized that language – especially in syntax, time, and history – is a powerful container of meaning. An artistic approach to word choice can be harnessed to deepen peacebuilding.

“Some people find themselves speechless in the face of conflict, and others find themselves with extraordinary access to language that is perhaps the most devastating in the space of conflict and can say things that are ultimately unforgettable,” he said. -he declares. “It can happen between people who love each other, as well as people who hate each other, or both. And for me, conflict resolution has always been an act of poetry to reflect on what is possible in the poem created in the room where a conversation is taking place.

Although he is already familiar with conflict resolution theory from his work in peacebuilding in Ireland, Ó Tuama said he found Coleman’s textbook to be an excellent resource during his residency. He first met Coleman about five years ago, when the Columbia professor emailed him out of the blue. Coleman was mourning the loss of a friend and heard an interview with Ó Tuama on NPR’s On Being with Krista Tippett. 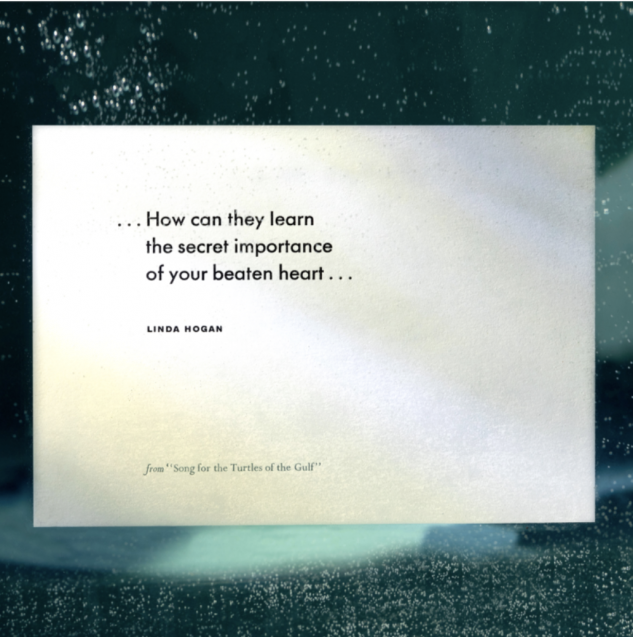 Listen to Pádraig Ó Tuama read “Song for the Turtles of the Gulf” by Linda Hogan on Onbeing: Poetry Unbound. Image: Typographic Prints by Myrna Keliher | Photograph by Lucero Torres

“I was really taken by it,” Coleman said. He contacted Ó Tuama, who ironically happened to be just down the street while visiting New York, and they struck up a friendship and creative partnership. Coleman immediately sought ways to bring Ó Tuama to New York as a collaborator, and this year’s residency was made possible with support from The Climate School, Columbia University’s Teachers College, and two anonymous donors.

“One of the things I’ve had the privilege of being able to do over the past 20 years is to work in these multidisciplinary teams, which bring together very different types of people”, to study the complex and multifaceted problems of the planet. , Coleman said. . “I always learn by working with colleagues who approach problems from a fundamentally different perspective. It’s refreshing for me. This is essential for understanding the different natures of phenomena and for advancing our understanding of complex topics.

Most recently, at Columbia’s Advanced Consortium on Cooperation, Conflict, and Complexity, Coleman leads the Sustaining Peace Project, a team of multidisciplinary researchers dedicated to bridging the gap between academic understanding and practical applications of sustainable peace. The group works to reach a consensus on the types of language that represent “peace speech” – the opposite of “hate speech” – in order to explore how language could be used to repair and heal violent communities. or broken. For one project, the team is using machine learning to analyze 900 million news articles published over a 10-year period in very violent and very peaceful countries. They analyze and compare language differences between countries.

“What data science can sometimes reveal are fundamental cultural differences in how people communicate, which can be harder to find when you study language at the micro level,” Coleman said. “And what we see in the extraction of this language between these societies is that there are different lexicons that operate in very peaceful societies versus less peaceful societies. The structure of the language is different.

According to Coleman and Ó Tuama, the use of “peace speech” is very important when discussing controversial environmental issues like climate change. Ó Tuama will explore this concept further in the work published after his residency ends in May.

“The question of which language works and which language should be avoided is fluid, depending on the room. In some groups, for example, you know, “climate deniers” can be a phrase that, even if you think it’s accurate, is actually just going to hinder the possibility of communication and is going to make someone feels insulted,” Ó Tuama said. “The biggest question for the communicator in this area is, ‘What do you want? What do you hear in this negotiation? And how can your language be focused on and achievable and achievable and important to the resolution rather than trying to win every little battle?”

During Ó Tuama’s residency, he will also lead several public readings and workshops, open to Columbia University students and the general public. The hope is that these events will be useful for writers and communicators as well as students of narrative medicine, climate change, theology and conflict resolution, he said.

Poetry Lab: Exploring the intelligence of conflict through the prism of a single poem

Open to everyone. Register here.

Poetry and climate: Bringing together a poet and a climate scientist, these three online sessions will explore climate change, place, lamentation, protest and art. The sessions will be available on Youtube after the series. Dates and times to be determined. Check our events page for updates.

Poetry and Conflict: Bringing together a poet and a conflict scholar, these three online sessions will explore conflict, language, lamentation, change and intervention. The sessions will be available on Youtube after the series. Dates and times to be determined. Check our events page for updates.