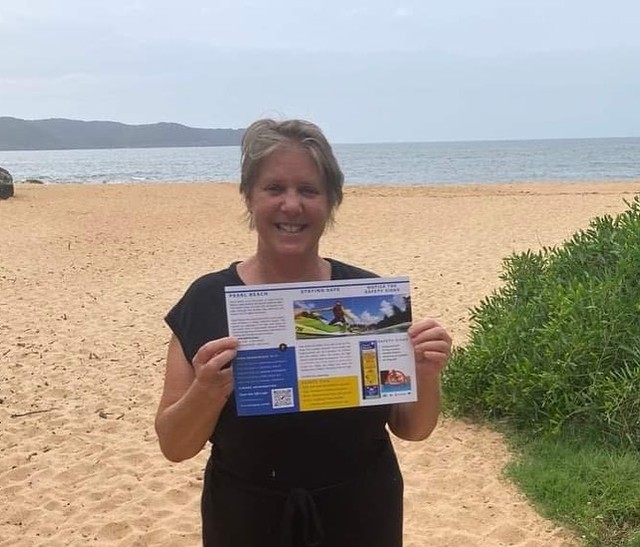 A group of residents have created a beach safety brochure for swimmers at Pearl Beach, after the unsupervised area was declared a ‘black spot’ due to drownings and crashing waves.

Umina and Ocean Beach SLSCs are currently the first responders for aquatic and other emergencies occurring at Pearl Beach.

“Pearl Beach has a vibrant community that is proactive in providing safety information and resources to help prevent future tragedies,” Lambeth said.

“Central Coast Council has worked with the Pearl Beach Progress Association on signage and safety resources and explored logistics and options for future education or rescue coverage over the Christmas period.

“Central Coast Surf Life Saving has developed ‘black spots’ brochures to help educate the community about the particular dangers at an unsupervised beach or section of beach identified by surf clubs as unsafe for the public.

“It’s exciting to see the parties involved begin to work together towards a common goal – zero drownings at Pearl Beach!”

Lambeth, who is also the founder of Deep Water Publishing, said she had a particular interest in drowning prevention at Pearl Beach, with her first publication, Annie and the Waves, dedicated to the memory of a boy from five-year-old who drowned at Pearl Beach in 2014.

“Education has been identified as one of the best ways to help prevent drowning,” Lambeth said.

“By learning about a beach and its inherent dangers, we can make wiser choices about where and when to swim.

“Providing safety-specific information at Pearl Beach will help educate residents and visitors, who in turn can share this knowledge with others.

“There have been two recent drownings at Pearl Beach – a five-year-old boy drowned in July 2014 and a man in his 60s who tried to save a dog in March 2021.

“In addition, anecdotes of rescues are regularly reported, but at this stage the data is not captured or reported.

“Pearl Beach has a unique beach morphology…the sand is quite different from neighboring Umina and Ocean beaches. The shape of the beach, the direction it faces, and the specific type of sand found on the beach reveal just how dangerous the beach is.

“It’s particularly dangerous for children and the elderly, which matches the two people who drowned here.

“The middle at the northern end of the beach is particularly dangerous for everyone.”

The first was held earlier this month and the second beach education session was held on January 26.

Lambeth said there are five key measures to staying safe in the water: don’t rush in until you’ve researched potential hazards, plan to swim at a supervised beach, never swim alone, always supervise children and do not consume alcohol if you plan to enter the water.