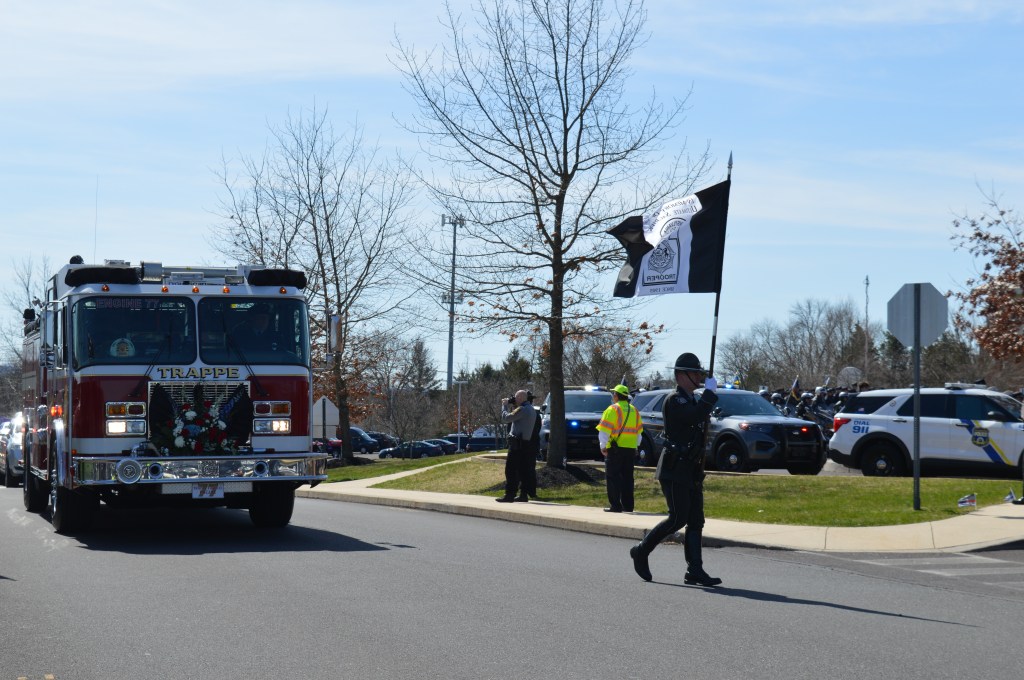 COLLEGEVILLE — More than 1,000 people gathered outside Perkiomen Valley High School on Saturday morning to pay their respects to deceased Pennsylvania State Trooper Branden T. Sisca, 29, who was killed last month in the exercise of its functions.

A procession left a funeral home in East Norriton Township around 10:30 a.m. as police, firefighters and other first responders accompanied several limos to Sisca’s alma mater, located at 509 Gravel Pike.

A number of law enforcement officers stood at attention nearby as the Pennsylvania State Police pipes and drums, a line of police motorcades and fire engines concluded the procession. Several flags were held outside the entrance to the school where a funeral service was held inside.

“Today is to honor his service, his sacrifice, not only as a state trooper, but also as a firefighter, and as a husband, son, family member,” said the cap. Brent Miller, Pennsylvania State Police Public Information Officer.

In addition to his time as a state trooper, Sisca served as fire chief for the Trappe Fire Company. He was also the son of Montgomery County Deputy Sheriff Craig Sisca.

Services and visitation for Sisca and fellow Trooper Martin F. Mack III, 33, were held this week in Montgomery and Bucks counties, respectively. Both men were killed in a March 21 accident on Interstate 95 in Philadelphia.

On Saturday, members of the public service from across the country turned out to honor the memory of Mack and Sisca, according to Miller, who said the Iowa contingency drove for more than 15 hours.

“It really shows that the support goes beyond Commonwealth borders,” Miller said. “It is reached all over the country up to the west coast to the center of the country.”

“This show of support is widely appreciated,” Reed told reporters Saturday morning. “It was heartwarming to see … our brothers and sisters in law enforcement across the United States.”

Crowds lined the street outside Perkiomen Valle High School, watching the procession unfold. A line of officers could be seen waiting to enter the school to honor Sisca’s memory.

Organizers distributed brochures featuring photos of Sisca on her wedding day, as well as with her family, friends and colleagues.

The pamphlets included the Pennsylvania State Police’s “Call of Honor” on the back cover, which said in part that “I must serve honestly, faithfully and, if necessary, lay down my life as others have done before me, rather than stray from the path of duty.

Sisca and Mack responded just before 1 a.m. on March 21 to reports of a man, later identified as 28-year-old Reyes Rivera Oliveras, of Allentown, walking south on the I-95 near mile marker 18 in Philadelphia, according to state police. Officers had ‘helped him into the back of their patrol car’ when the suspect allegedly ‘attempted to drive past the scene’ and ‘fatally struck the three (people) and the patrol car…and stayed on site “.

Oliveras was also killed, according to state police. The suspect, later identified as Jayana Tanae Webb, 21, of Eagleville, was arrested in connection with the incident which claimed the lives of Mack, Oliveras and Sisca.

Webb has been charged with a host of offenses including third degree murder, second degree murder of a law enforcement officer, homicide while driving a vehicle and driving under the influence. affecting. A judge has ruled that Webb will be held without bond after his arraignment. Webb’s next court appearance is a preliminary hearing scheduled for Tuesday morning at the Philadelphia Criminal Justice Center.

Sisca was born on June 23, 1992 in Norristown, according to her obituary. He graduated from Perkiomen Valley High School and later attended West Chester University where he earned a bachelor’s degree in criminal justice. Sisca went on to earn a master’s degree in safety, security, and emergency management from Eastern Kentucky University.

Sisca began his journey with the Montgomery County Department as a junior firefighter, according to a post on the fire company’s website. Along with Sisca’s role as treasurer of the fire company, he progressed through several positions from lieutenant to captain, battalion commander to deputy chief before assuming the position of fire chief.

Sisca’s obituary lists several of his hobbies including working out, watching the Philadelphia Flyers and traveling to Ocean City, New Jersey. He is survived by Sisca is survived by his parents Craig and Mary Sisca, his wife, Brittany, and their unborn daughter, as well as other relatives and friends.

Locals paid their respects to Mack as a procession moved from Wade’s Funeral Home, Bristol, to St. Michael the Archangel’s Church, Levittown.

Hundreds of vehicles then accompanied Mack’s body from the service to its final resting place at Our Lady of Grace Cemetery, located in Middletown Township.

It is not yet known when Sisca will be buried. His burial is expected to be private, according to a state police statement.

Nearly two weeks after the tragedy, local and local organizations have launched fundraising campaigns to help families, including the Pennsylvania State Troopers Association’s “Troopers Helping Troopers” program, according to Reed, as well as through Montgomery County. HeroFund.

As people paid tribute to the two men in uniform who “made the ultimate sacrifice,” Reed took a moment to reflect on those events.

“It puts everything into perspective. These two men led incredible lives, lives of service,” he said.