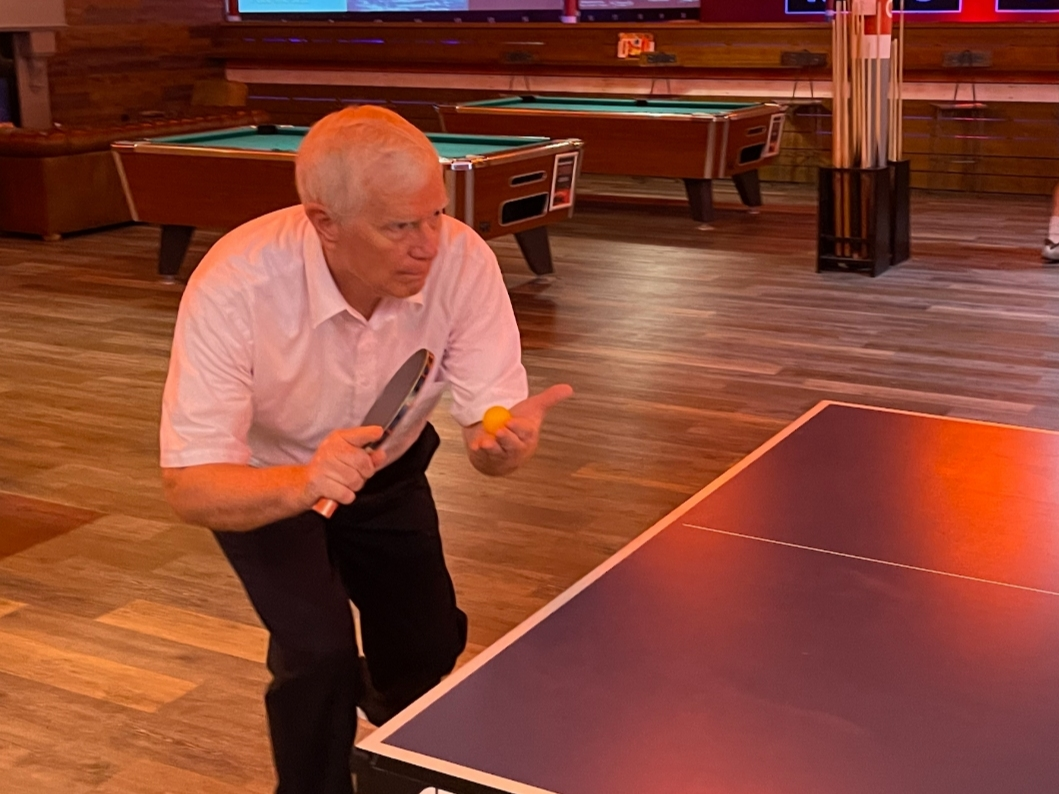 TUSCALOOSA, AL – I could feel sweat forming into small beads on my head and the back of my neck as the first orange ping pong ball whistled past me and shook the wood floor in front of a dozen people in Bowlero in Tuscalosa.

Any way I could have spent my Thursday afternoon, I was being pushed around at table tennis by U.S. Senate candidate and Republican Congressman Mo Brooks. Yes, you read that right.

On the third day of hearings in Washington D.C. regarding the January 6, 2021 insurrection on Capitol Hill — an event to which he is directly linked — and less than a week before the June 21 GOP primary runoff, Brooks was in Tuscaloosa … taking a break from squeezing the flesh to beat the ever loving shit of me at ping pong.

“Are you sure you’re warmed up?” he asked me.

Who did he think he was talking to?

I grew up with a ping pong table, after all, and I’m proficient at that game. I have good hand-eye coordination, but I’m way too proud to admit defeat early on and ignored his offer for a few warm-up laps. I was ready to play.

How the hell did we get here?

Wasn’t it just over a year ago that my ping pong opponent stood before an angry mob outside the White House and suggested it was “time to start taking names and kicking ass”?

While I didn’t even attempt his first fastball serve, the second had so much English on it that I could only plant the ball in the ground with the side of my racquet.

At this point, my face and ears were flushed…and not out of a sense of competition.

I gave up after dropping five straight sets in embarrassing fashion to the 68-year-old white-haired man and couldn’t help but laugh at the absurdity of the situation I found myself in. It wasn’t until after that impromptu campaign stop — and learning that Brooks had brought his own paddle, that I learned of his lifelong passion for the game.

But after a quick and sonic beating that had those gathered laughing, he still allowed me some time to discuss recent developments on the campaign trail, namely former President Donald Trump’s endorsement of his opponent Katie Britt in the second round of the Republican primary next week. .

The news came as the latest unexpected shock for Brooks’ camp, given that he was one of Trump’s earliest allies in Congress. Indeed, it was the Alabama congressman who stood by Trump through countless controversies, leaving little time to effect meaningful legislative change during his time on Capitol Hill.

But he will reach his MAGA zenith on January 6, 2021, when he becomes one of the most infamous players at The Ellipse rally held on the grounds of the White House ahead of the deadly attack on the US Capitol in the hours that followed.

Despite his loyalty to Trump, a drop in poll numbers, mixed with the poor reception of Brooks calling on Trump’s most ardent supporters to stop contesting the results of the 2020 presidential election, both likely factored into the Trump’s decision to withdraw his endorsement of Brooks in favor of sensing the results of the Republican primary in May.

Trump’s passion for sideburns has been nauseatingly documented over the years, but most thought he was unlikely to endorse a former aide to US Senator Richard Shelby – one of his closest rivals. more powerful in the Republican Party.

As I wrote last week, Brooks was then reduced to publicly pushing for Trump’s endorsement after he fought his way to a runoff and only received news that the former president would back his opponent on June 21. After putting so much of his own career on the line, Brooks saw it as a direct betrayal by a dishonest man.

He then repeated the words first reported by AL.com columnist Kyle Whitmire last week: “Donald Trump has no loyalty.”

“He gave me his word that he was going to support me and others, and then he gave me his word that he was not going to support Katie Britt,” Brooks told me, leaning on a pool table. “In 2016 he said that Ted Cruz’s father was involved in the assassination of John F. Kennedy. Sometimes he says things for effect that are clearly wrong on the face of it, but maybe does it in a humorous or sarcastic context, but there are a lot of things he says that are not true.”

And Brooks is certainly not one of the people to scoff at recent comments, especially when Trump called him “woke” — a term that has different political meanings depending on who you ask. For the sake of Trump’s use of the term, the label implies that Brooks supports progressive social justice movements such as Black Lives Matter.

Brooks and I may be divided on just about every political issue, but the sheer stupidity of using the term “woke” to describe the rogue congressman is something we can easily agree on.

To his credit, Brooks is one of the few in Congress to occupy some ideological fringe. The party’s anti-establishment wing is taking unnecessarily hardline and increasingly hardline stances on immigration and the overthrow of Roe v. Wade, in addition to battling public health measures during the various phases of the coronavirus pandemic.

Brooks has also been a politically advantageous supporter of the Second Amendment, at a time when many across the country are calling for some kind of gun reform to address the prevalence of mass shootings in America. His stance remained unchanged even after he was one of many elected officials present in 2017 when a gunman opened fire at a practice for a charity softball game – a shooting that injured four people, including his colleague and Republican House Whip Steve Scalise.

“No one who knows my past would think for a minute in New York that I’m awake,” he said. “And according to the American Conservative Union, I have the highest grade of any member of the United States Congress from Alabama, so that’s part of Donald Trump’s modus operandi. He says things to get attention and effect. You can’t take it at face value.”

However, many voters are taking the former president’s words at face value, as Brooks trails his opponent in the polls with less than a week until the vote. Even in places like Tuscaloosa, electronic billboards featuring Britt and Trump can be seen touting presidential approval.

“It all depends on who shows up to vote,” he told me on Thursday. “If conservatives, republicans and thoughtful people show up to vote, then we’re doing just fine. If people who are in love with cheeky thoughts, pamphlets and attack ads go to the polls, then Katie Britt will win because she has the millions of dollars in special interest group money to air this I’m not doing I’m a conservative I’m a Republican and I’m not the candidate who has been endorsed by the executive director of the Alabama Democratic Party.

Echoing his latest campaign ads, Brooks took aim at the recent turmoil in Alabama’s political ecosystem, most notably when outgoing Alabama Democratic Party Executive Director Wade Perry took to Twitter to say that Britt was “super helpful” in the 2017 election of Democrat Doug Jones to his single, truncated term in the US Senate.

As AL.com’s Paul Gattis first reportedPerry also praised Britt for her role in passing and implementing the state’s gas tax increase, saying “most ‘Dems’ understand that she just has to ‘say ‘ some things.”

“People need to do their homework,” Brooks lamented. “If they’re conservative and Republican, it’s a no-brainer they’re voting Mo Brooks. If they’re liberal and Democrat, they’re voting Katie Britt…Democrats technically aren’t supposed to vote in Republican primaries, but still some Democrats are less honorable than others and they participate in our primaries even though they are not supposed to under the United States Constitution.”

This interpretation of the law by the congressman is, at best, distorted.

As it stands, Alabama prohibits cross-voting in party primaries, which means that if you vote in a party’s primary, you cannot legally vote in the runoff for the party. opposite. Crossover restrictions do not apply to general elections.

What Brooks is referring to, however, is undeniable and arguably a primary fear among more fringe conservatives in red states, as candidates with overt establishment ties – like Britt – show wider appeal. for more moderate and liberal voters who live in extremely conservative areas. .

While party officials definitely take issue with card-carrying members voting for or even donating to those in other parties, it goes without saying that the vast majority of Alabamians are not dues-paying Republicans or Democrats. They just don’t have the time.

It seems, however, that Brooks can already see the writing on the wall regarding how Alabama’s conservatives might vote on June 21 and the change in tone in his voice when his attention shifted from ping-pong to politics was hard to ignore.

Yet after our conversation ended and the conversation returned to the game, he smiled and said “Maybe once I get elected to the Senate, you can look for me and we’ll play again.”

Ryan Phillips is the founder and editor of Tuscaloosa Patch. The opinions expressed in this opinion column are his own and do not necessarily reflect the views and opinions of our parent company.

Get more local news straight to your inbox. Sign up for free newsletters and patch alerts.