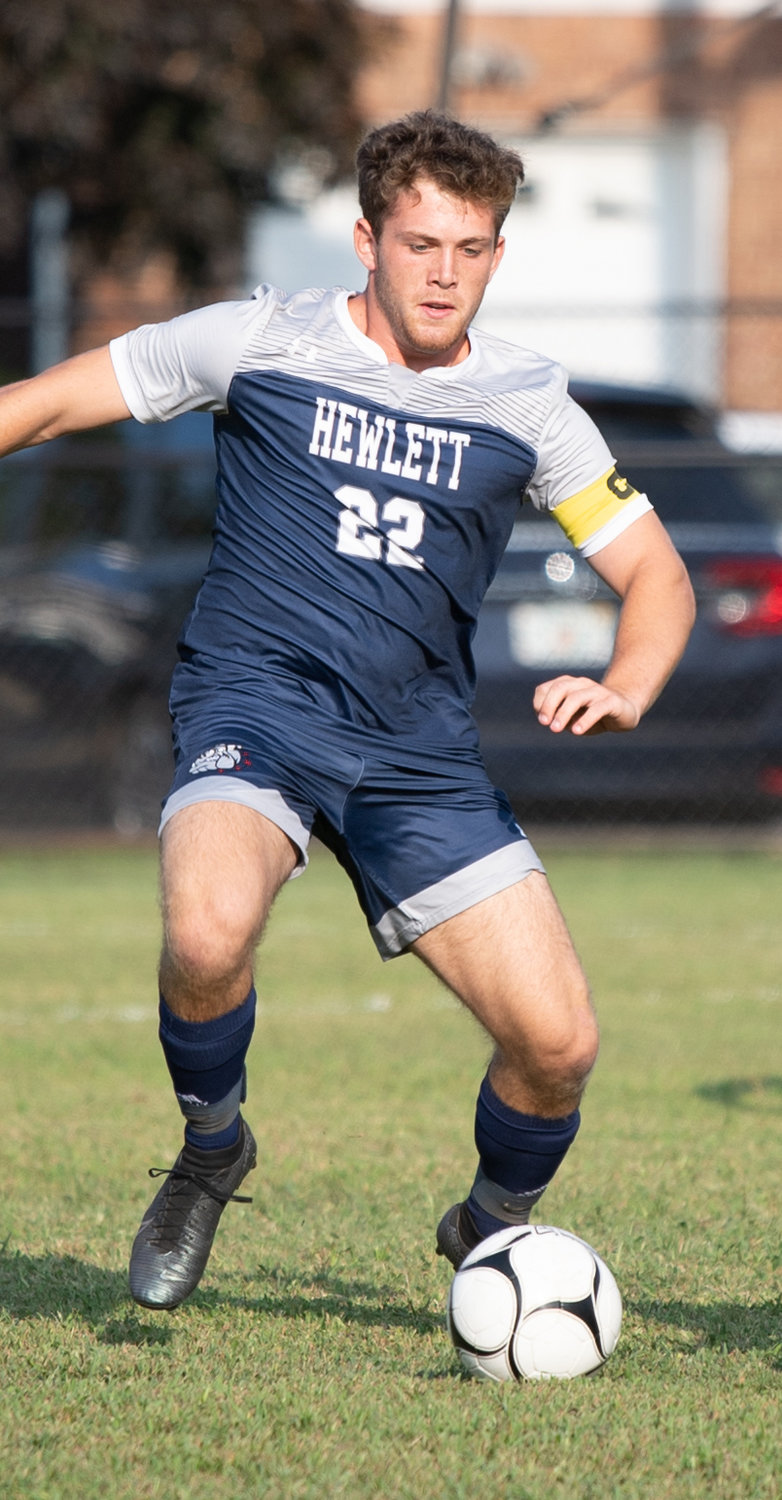 Jesse Corben didn’t hesitate to wait a few extra days to claim his first win as Hewlett boys’ football coach after 14 seasons as Nick Lacetera’s assistant.
The Bulldogs beat neighbor rival Lawrence, 4-2, on the road in the A-Central Conference opener on Sept. 12, just over 24 hours after squandering a two-goal second-half lead at Plainedge in a non-league game. Hewlett then followed up the win over Lawrence with an impressive 3-0 victory over the South Side in their home opener on September 14.
“Lawrence and South Side have been two of the best teams in the county for years,” Corben said. “It’s definitely a confidence booster for our guys to open the conference schedule this way. Now we feel like we can play with anyone. We just have to maintain the intensity because there are no easy games.
Senior goaltender Matteo Preziosi, a returning starter, made 8 saves in the shutout win over South Side. “Matteo gives us a chance to win every game,” Corben said. “He’s a big boy who does solid work and leads by example. He is aggressive with the ball and has a strong leg.
Senior Ori Assaf opened the scoring and then fouled in the box which led to junior Matthew Lamour’s penalty kick as Hewlett took a 2-0 lead at half-time. Senior Ryan Goodman headed the final goal.

“South Side is historically one of Nassau’s strongest programs,” Corben said. “We haven’t had much success against them over the years. Even though the score was 3-0, we didn’t dominate. We capitalized on our opportunities and did a great job in the back moving the ball quickly.

In the conference opener, the Bulldogs scouted Lawrence for a 1-0 lead and also trailed 2-1 in the second half before scoring three unanswered goals. Lamour had a hat trick and senior Eric Riftin scored a goal and an assist.

“It was great to see how the kids reacted,” Corben said. “We had two tough non-league results. We tied the split 3-3 and lost 3-2 to Plainedge after leading 2-0. Looking back, the Plainedge game could be a blessing in disguise. We learned a lesson and he was not a conference opponent.

In addition to Preziosi, the Bulldogs fired a group of starters from last season when they failed to qualify for the Nassau Class A playoffs. Senior Max Mariasch is the only returnee to the starting defense and brings physical presence and leadership. He was joined by senior speedsters Dylan Joseph and Rafael Iraheta, as well as second Kfir Halfon, who has impressed Corben so far after playing at JV level last fall.

The all-senior midfielder features Riftin as a striker, Goodman and Dylan Rave as workhorses battling for 50-50 balls, and converted defender Assaf, Matthew Mata and Sergio Zumba on the outside. Lamour also sees time in midfield but is the team’s main striker. “Matthew can dribble at full speed and is our counterattack weapon,” Corben said of Lamour, who captains with Mariasch, Goodman and Rave.