Citizen Tribeca | The Canal Street counterfeit operation goes on and on 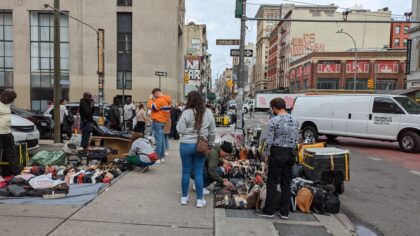 The Canal Street counterfeit operation goes on and on

The NYPD made a big announcement after their Operation Bag Guys in August, but here we are three months later and nothing seems to be changing on Canal Street.

Officers from the Bureau of Patrol Services made five arrests on August 12 and seized what they said were $2 million worth of counterfeit bags, watches, sneakers and sunglasses, and although it remained a little quieter for about a week, sellers were back in full force. by September. (J. sends me regular reports and I take pictures when I’ve been there.)

The NYPD said the raid was the result of complaints from the community and that, in fact, the officers were part of the quality of life initiative with the office. (They are fitted with a professionally trained staff member who confirms the bags are also counterfeit.) “And we know that the money raised from the sale of these counterfeit products is being used to fund criminal enterprises throughout the city of New York,” Deputy Chief Benjamin Gurley said. at the press conference.

Yet, what good was it? The sidewalks are still impassable. Not to mention trademark infringement. Out of frustration, neighbor Raphael A. recently started a petition to “show law enforcement that as citizens we care about our city.” Sign it here.

Is there a chance for original thinking around this problem?