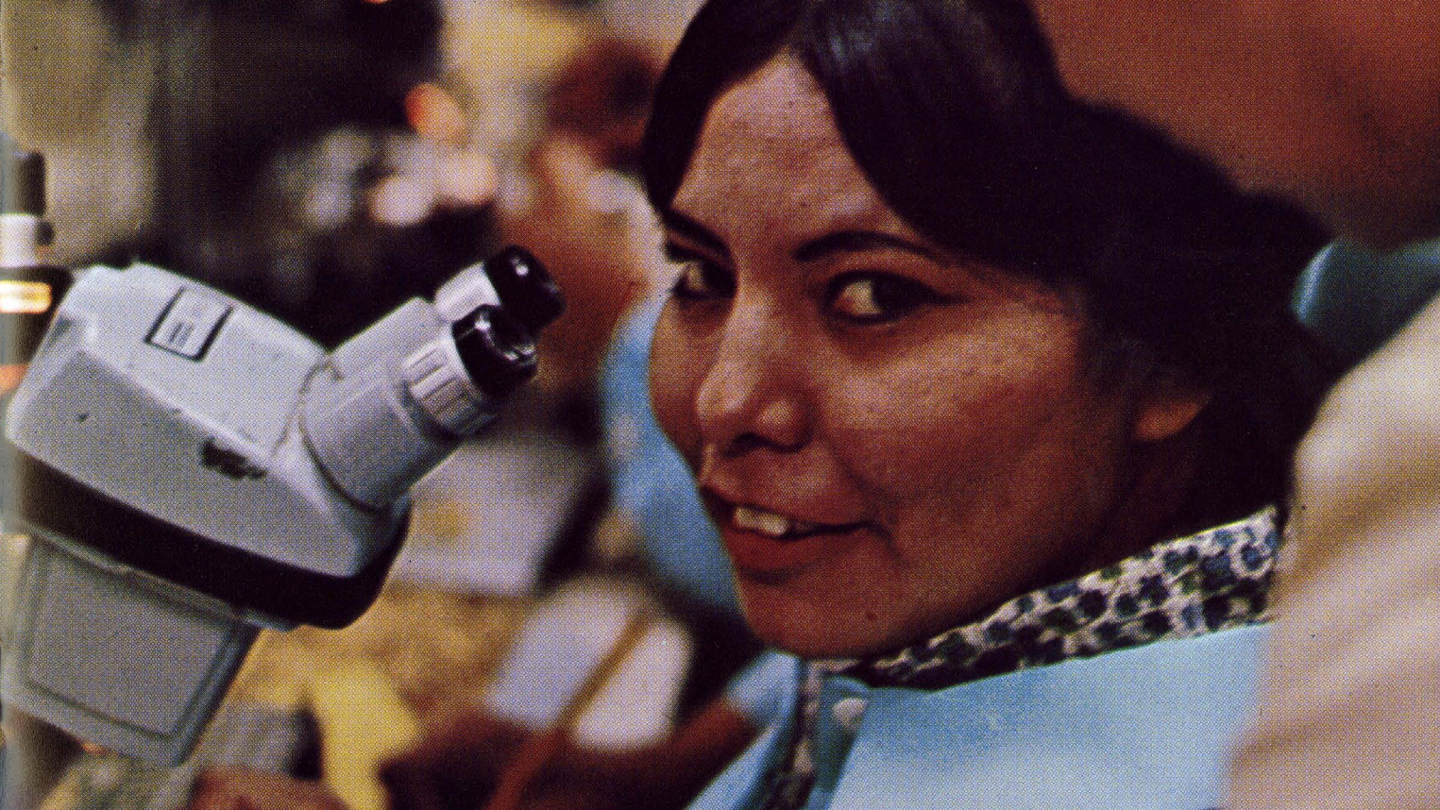 Apollo’s historic lunar missions are often associated with high-visibility test flights, dazzling launches and spectacular engineering feats. But intricate and challenging manual labor – comparable to weaving – was just as essential to sending men to the moon. Beyond Neil Armstrong, Buzz Aldrin and a handful of other names we remember, there were hundreds of thousands of men and women who contributed to Apollo over a decade. Among them: the Navajo women who assembled state-of-the-art integrated circuits for the Apollo guidance computer and the Raytheon employees who wove the computer’s core memory.

In 1962, when President John F. Kennedy declared that putting Americans on the moon should be NASA’s top priority, computers were big mainframes; they occupied entire rooms. And so one of the most daunting but crucial challenges was to develop a highly stable, reliable and portable computer to control and navigate the spacecraft.

NASA chose to use state-of-the-art integrated circuits in the Apollo guidance computer. These trade channels had only recently been introduced. Also known as microchips, they revolutionized electronics and computing, contributing to the progressive miniaturization of computers, from mainframes to today’s smartphones. NASA sourced the circuits from the original Silicon Valley start-up, Fairchild Semiconductor. Fairchild was also leading the way in the practice known as outsourcing; the company opened a factory in Hong Kong in the early 1960s, which by 1966 employed 5,000 people, compared to Fairchild’s 3,000 California employees.

At the same time, Fairchild was looking for cheap labor in the United States. Lured by tax incentives and the promise of a workforce with almost no other employment options, Fairchild opened a factory in Shiprock, NM, on the Navajo Reservation, in 1965. The Fairchild factory operated until in 1975 and employed over 1,000 people at its peak. , mostly Navajo women making integrated circuits.

It was hard work. Electrical components had to be placed on tiny chips made of a semiconductor such as silicon and connected by wires at specific locations, creating intricate and varied patterns of lines and geometric shapes. the Navajo women’s work “was made using a microscope and required painstaking attention to detail, excellent eyesight, high standards of quality and intense focus,” writes digital media specialist Lisa Nakamura.

In one brochure commemorating the inauguration of the Shiprock factory, Fairchild directly compared the assembly of integrated circuits to what the company described as the traditional, feminine, indigenous craft of carpet weaving. The Shiprock brochure juxtaposed a photo of a microchip with a photo of a geometrically patterned rug and another of a woman weaving such a rug. This portrayal, Nakamura argues, reinforced racial and gender stereotypes. The work has been labeled “woman’s work”, depriving Navajo women of proper recognition and commensurate compensation. Journalists and Fairchild employees “also portray[ed] electronic manufacturing as a high-tech version of blanket weaving done by willing and skilled indigenous women,” Nakamura notes, but “the women who did this work did it for the same reason that the women did the work in factory for centuries – to survive”.

Far from the Shiprock Desert outside of Boston, Raytheon employees assembled the Apollo Guidance Computer’s core memory with a process that, in this case, directly mimicked weaving. Again, lunar missions required a stable and compact way to store Apollo’s computer instructions. Core memory used metal wires threaded through tiny doughnut-shaped ferrite rings, or “cores,” to represent 1s and 0s. All of this core memory was hand woven, with women seated on opposite sides of a panel passing a wire needle back and forth to create a particular pattern. (In some cases, a woman worked alone, passing the needle through the panel.)

Apollo engineers called this memory building process the “LOL” or “Little Old Ladies” method. Yet this work was so mission critical that it was repeatedly tested and inspected. Mary Lou Rogers, who worked on Apollo, reminded“[Each component] had to be examined by three out of four people before being stamped. We brought in a group of federal government inspectors to check our work on an ongoing basis.

Core memory was also known as string memory, and those who oversaw its development were “string mothers”. We know a lot about a rope mother – Margaret Hamilton. She was recognized with the Presidential Medal of Freedom, among other accolades, and is now known as the woman who oversaw most Apollo software. But his efforts were not recognized by many at the time. hamilton reminded“At first, nobody thought software was so important. But then they started to realize how much they relied on it…. Astronauts’ lives were at stake. Our software had to be ultra-reliable and able to detect error and recover from it at any point in the mission. And it all had to fit on the hardware. Yet little is known about the thousands of others who did this critical work of weaving ICs and memory central.

At the time, Fairchild’s portrayal of Navajo women’s labor as female craftsmanship differentiated it from high-level, male engineering work. As Nakamura has writingwork “came to be understood as emotional labor, or ‘labor of love’.”loving care.” Journalists and even a Raytheon official presented this work as requiring no thought and no skill.

A 1975 NASA report that summarized the Apollo missions spoke enthusiastically of the Apollo computer systems – but did not mention any of the Navajo or Raytheon women. “Computer performance was flawless“, states the report. “Perhaps Apollo’s most significant achievement in guidance, navigation, and control was the demonstration of the versatility and adaptability of computer software.”

This computer and software relied on the skilled, technical, and embodied expertise and labor of thousands of women, including women of color. They were undoubtedly women of science, and their untold stories call us to reconsider WHO does the science, and what counts as scientific expertise.