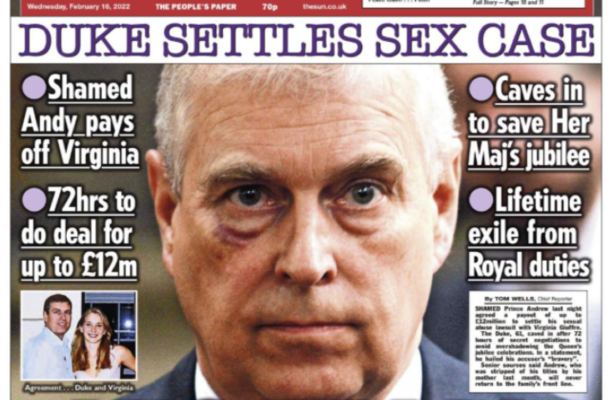 Prince Andrew with Virginia Giuffre and Ghislaine Maxwell, who was recently convicted of sex trafficking

BRITAIN’S PRINCE ANDREW faces a new call to give up one of his last remaining major titles after agreeing to settle the civil sexual assault claim against him for what is widely reported to be a sum of millions of books.

Andrew, whose status as a member of the British royal family was left in tatters last month after the Queen stripped him of his honorary military duties and he gave up his HRH style, has been asked to show of “respect” by now losing his dukedom.

The Queen’s second son “regrets his association” with disgraced financier Jeffrey Epstein, says a letter submitted to the US District Court.

The royal has agreed to make a “substantial donation” to his accuser Virginia Giuffre’s charity after the couple agreed to an undisclosed out-of-court settlement in their civil complaint against him.

No details were released regarding the settlement and costs, but it was reported that he had agreed to pay an eight-figure sum and there was speculation the Queen could help with the costs of her funds private.

The Daily Telegraph reported that a deal was reached over the weekend after at least 10 days of negotiations between the two sides.

The newspaper said the total amount to be paid to Giuffre and his charity exceeds £12 million (more than €14 million), and said part of it will be paid for by the Queen.

Buckingham Palace declined to comment on Tuesday’s legal developments, while representatives for Andrew also declined to say how Giuffre’s charity donation would be funded.

The latest developments provide the main story for most UK newspapers today.

The Daily Telegraph reports that the Queen will help pay for the settlement, with The Sun calling the resolution Andrew’s “final disgrace”.

The Daily Mirror reports that Prince Andrew is ‘making a £12m deal to end the sex claim’, with The Guardian claiming the move spares the royal the ‘humiliation’ of being tried.

The Daily Mail uses ‘humiliation’ in its headline, while the story is also covered by The Independent and I, as Metro put it, the Duke is ‘finally paying’.

“The royal wrong paid to a sexual victim he has never met. As you do”, headlines the Daily Star, with the Daily Express warning “there is no turning back “.

Tomorrow’s front page: Royal Wall One pays off to a sex victim he’s never met. as you do #TomorrowsPapersToday https://t.co/xwthfKbvKP pic.twitter.com/ibJ2asc27d