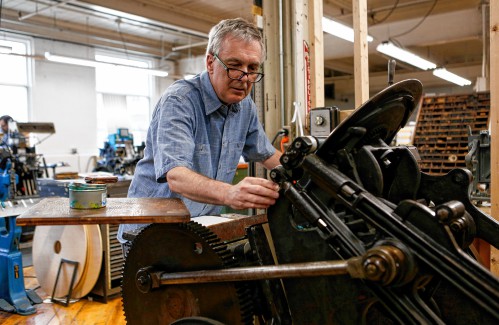 He has around 20 chugging, humming beasts in his store, many of which have been brought back to life after being left for dead in dumpsters and dark basements.

His creatures were once considered a near-extinct species, but thanks to the care of specialists like him, they are now thriving.

Muller, owner of Big Wheel Press, rescues and restores giant letterpress printing machines dating from the 1860s through the 1970s. He uses them to make specialty greeting cards, posters and more.

“We are being called in for rescues at print shops that are closing,” he said. “We show up with a big truck and don’t know what we’re going to find.”

Letterpress, a technique that dates back to at least the 1400s, was once used to print everything from newspapers to greeting cards, but it went out of style in the 1970s and 1980s thanks to technological innovations.

The style is now enjoying a renaissance in part due to a modern taste for all things vintage. But typography requires people like Muller to find and restore the machines and people to learn the technique, which most art schools have stopped teaching.

Muller, who opened Big Wheel Press in 2006, estimates that about 300 operations across the United States currently use letterpress printing and only about 50 are as large as his.

Although letterpress was already a rare technique, Muller made his printing business even more specialized.

One of his machines can cut and press aluminum foil onto cards. He hired a bookbinder, so the shop now designs and binds notebooks in-house.

Big Wheel Press is also one of the few well-known shops in the world that can still launch Hebrew and Yiddish versions. Most of the brass molds used to cast the characters were melted down during World War II or sold for scrap, but Muller found a collection of Hebrew molds a few years ago in the basement of a museum in Israel. Massachusetts Printing Press.

Muller, who is Jewish, uses the molds to create characters for Jewish greeting cards and marriage contracts, called ketubah.

“We like to do things that no one else can do,” Muller said.

Although Muller declined to say how many greeting cards he sells each year, one particularly popular baby card was purchased 5,000 times in one year.

The card features the multimedia styling of many Big Wheel Press designs, featuring a fabric insert, letterpress text and a cutout of a baby onesie. It won a LOUIE, an industry award, this year in the category of baby cards over $4. Muller beat out Hallmark for the honor.

Another of Muller’s designs, which shows a giant screw illustration above the word “cancer”, previously won the same award in 2016, but in a different category.

Big Wheel Press projects are designed by Muller and four other designers who live everywhere from Northampton to Brighton, England. The store distributes cards to companies around the world and works with big names like Turner Classic Movies, Fujifilm and the Container Store.

“We’re in about 1,000 stores right now, all over from Japan to England,” Muller said.

“The typography was going to die out, but it became popular for wedding invitations,” Muller said. “People like texture. They really want to feel it.

Muller’s personal history with the printing press began when he was a child. His parents bought him a tabletop printing press in 1964, which he used to make greeting cards and a journal for his family. The cards were also appreciated by his mother, who, according to Muller, sent them for all the holidays.

Now he shares this family passion with thousands of people.

“I can come up with an idea and bring it to life and print it,” Muller said. “I can create things people love and make people feel good.”