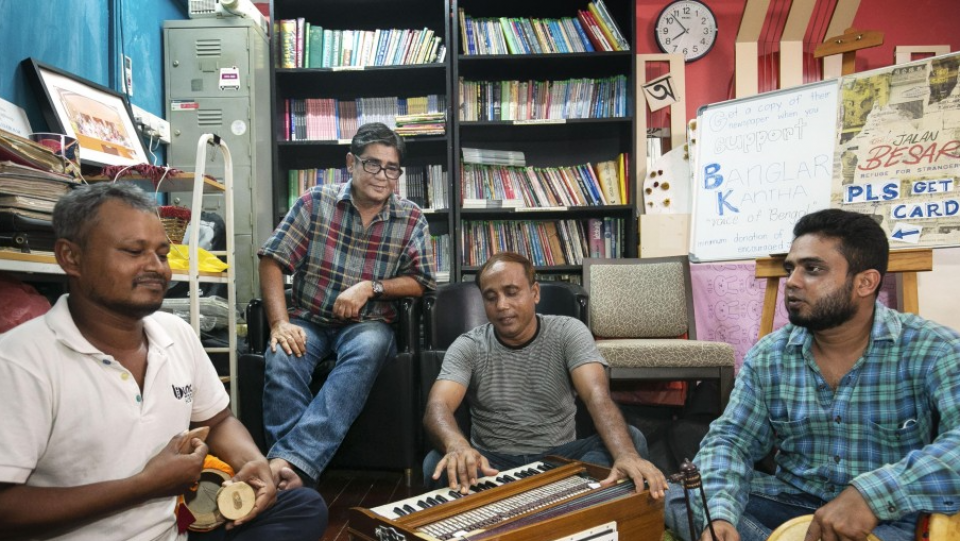 In a country where free speech is discouraged, Singapore’s only Bengali newspaper offers a platform for migrant workers to share their stories of hardship and joy in the affluent city-state they are helping to build from zero.

The monthly, called “Voice of Bengal”, is published in Bengali and targets the approximately 150,000 Bangladeshi migrant workers in Singapore, many of whom work in low-wage, labor-intensive jobs in the construction industry. country building.

Next to a huge luxury condominium in Geylang, Singapore’s entertainment district, AKM Mohsin, the newspaper’s editor and supporter of Bengali migrant workers, knocks on the door of a windowless house with an iron plate- dilapidated white covering its facade. “Kabir, are you there? he inquires.

Kabir Mamun, 51, limps on crutches after waking up from a bed in the hallway. Twenty migrant workers from Bangladesh live in the dimly lit room.

Three Bangladeshi migrant workers in Singapore play musical instruments at the office of the Bengali monthly newspaper ‘Voice of Bengal’ in the commercial enclave of Little India as the newspaper’s editor AKM Mohsin (2nd from L) listens to the 22 May , 2022. (Photo by Wee Teck Hian)(Kyodo)

Mamun broke his left femur late last year when he fell from the second floor of a construction site. Driven out of a room made available by his employer, he turned to a friend who offered him the cramped living space.

Mamun tells Mohsin, 58, that he hasn’t received a salary since his accident. He worried that his employer wouldn’t even pay his medical bills if he demanded too much of what Mohsin only sees as his right to workers’ compensation.

Mohsin eventually helped him find a lawyer, saying all employers are required to pay employees who are tied up and unable to work due to workplace injuries.

Before his injury, Mamun earned around 1,000 Singapore dollars ($700) a month, like most of his fellow Bangladeshis who work in Singapore. This relatively low salary in a country where the average monthly household income exceeds S$9,000 was still enough to pay the school fees of her four children who remained in Bangladesh.

Unemployed in his home country, Mamun has spent most of the past two decades as a migrant worker, sending almost all of his earnings to his family in the South Asian country. Singapore’s wealth and way of life are maintained by highly skilled professionals from around the world and low-wage migrant workers like Mamun.

Copies of the monthly newspaper, which is usually 20 pages long, are distributed to migrant worker dormitories and sold for S$1 in grocery stores. An online version of the document was launched in 2013.

The publication covers Singapore labor regulations, information on migrant labor in other countries, and news from home. It is packed with all the essential information for Bangladeshi migrant workers living in a foreign country.

The printed newspaper’s office is on the second floor of a former shophouse in the middle of the commercial enclave of Little India, along a narrow street lined with small shops selling spices, jasmine, as well as electronics , and serving Indian and Bangladeshi cuisine.

A flight of narrow wooden stairs leads to the small office with just enough space for a desk, a few chairs, tall bookcases and a rug under a skylight.

When Mohsin came to Singapore from Bangladesh in 1991 to study computer science, he often visited the district where thousands of migrant workers from the Indian subcontinent gathered on Sundays to reconnect and soothe their homesickness through the smells and the familiar sounds of their homeland. 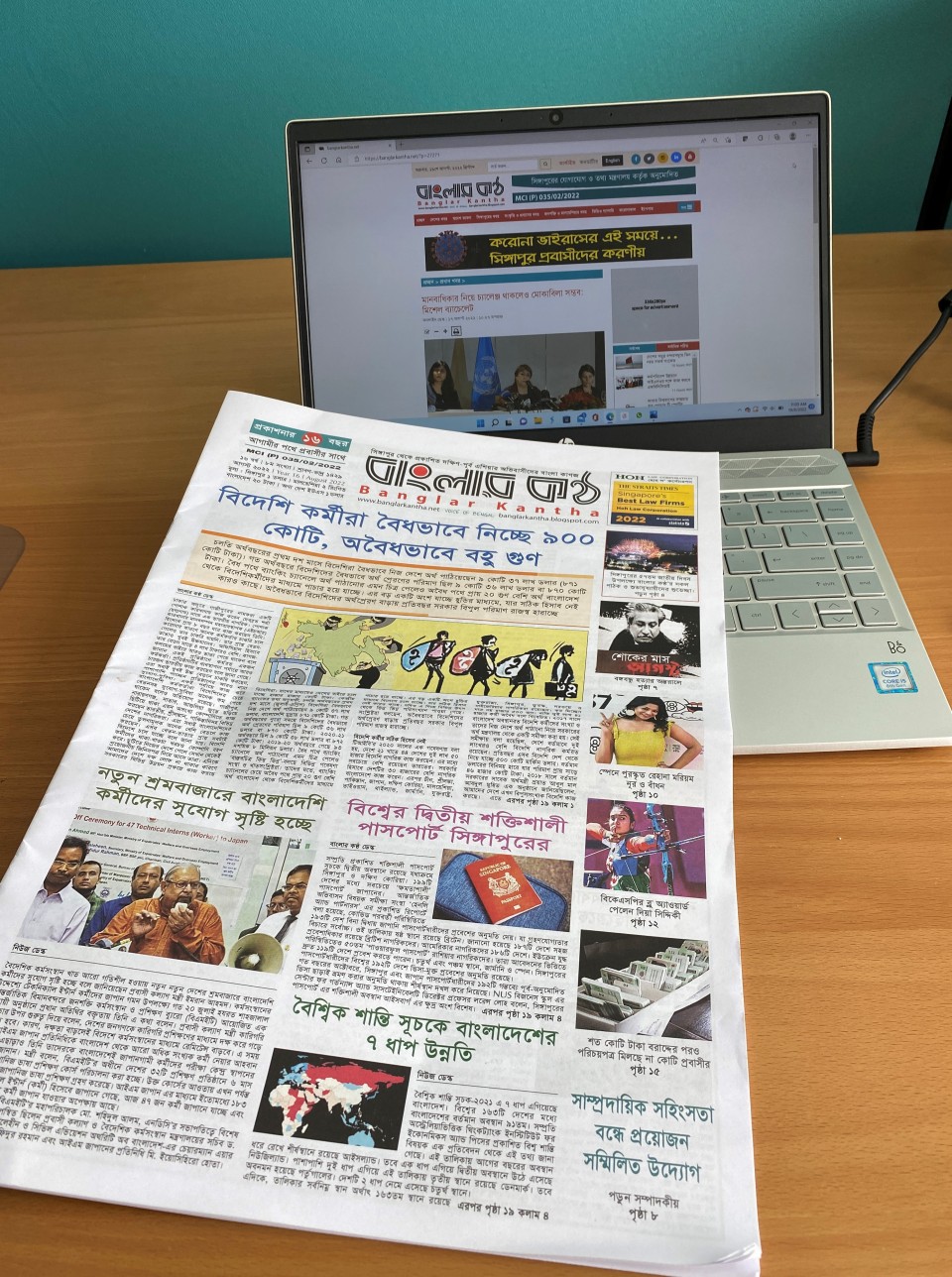 “I was very happy to meet my compatriots,” Mohsin said, explaining that he started having long conversations with a man from Bangladesh whom he met there and who asked him if he could l to help write a letter to his family.

At the time, Bangladesh had a low literacy rate. This was before the age of the internet or smartphones, and international phone charges were expensive, making letters the most reasonable way to communicate with people back home, Mohsin said.

After he began writing letters for free on behalf of his compatriots – to their parents, children and lovers in Bangladesh – Mohsin gained a reputation in the community and dozens of people began queuing for his services. Sometimes he read aloud letters they had received from home.

“I became very close to them. I had the idea that I should be the spokesperson for this community,” said Mohsin, who raised capital to launch “Voice of Bengal” in 2006, in deploying it with the help of a small team. including an editor in Dhaka and volunteer migrant workers in Singapore, among others.

An article titled “COVID Diary”, written by Mohiuddin Sarker, a 34-year-old construction worker, was published in the February print edition this year. It was a serial contribution that depicted Mohiuddin’s life in Singapore under the COVID-19 lockdown.

Mohiuddin was infected in April 2020 and quarantined for over three months. The 55-day account included his experience of being forced to self-isolate in a windowless room on a cruise ship and other facilities that had been hastily arranged as he had to move from place to place. the other even after his convalescence.

One of the doors was locked from the outside. He knocked on it several times to call the staff and let him out to go to the bathroom. Relying on his weak cellphone signal, he sent Mohsin his diary entries to somehow maintain his sense of sanity.

“I missed the sky. I was stuck in a windowless room,” Mohiuddin wrote.

As the first cluster of COVID-19 occurred in one of the dormitories full of migrant workers from Bangladesh, Singapore imposed restrictions, prohibiting them from leaving their accommodation except to work until September 2021.

This stood in stark contrast to the lives of well-earning Singaporeans and overseas expatriates, who faced far fewer restrictions. Mohiuddin says he felt like he was “treated like an object”.

In another story he contributed, titled “Journey by Lorry”, Mohiuddin wrote about his daily life as a construction worker, transported to and from a site with building materials in the back of a truck. The story, which aired in October 2017, was later translated into English and even made into a short video that was posted on social media.

“A truck is not made to transport people,” he said. Mounted in the back of the truck, workers are exposed to the sun and rain and run the risk of being thrown when the vehicle brakes suddenly. Some even died in such accidents, Mohiuddin wrote.

Although it is difficult to criticize the government in a country that restricts freedom of expression, the “Voice of Bengal” has listened to the plight of migrant workers and has become a starting point for discussions on how to improve their working conditions.

It attempts to shed light on the plight of workers who build the city’s skyscrapers, highways and rail tunnels, showing their marginalized place in Singaporean society.

The newspaper also plays a crucial role in encouraging Bangladeshi workers to cherish their culture and develop their writing skills. Many stories and poems of joy and sadness from contributors are published in the journal. 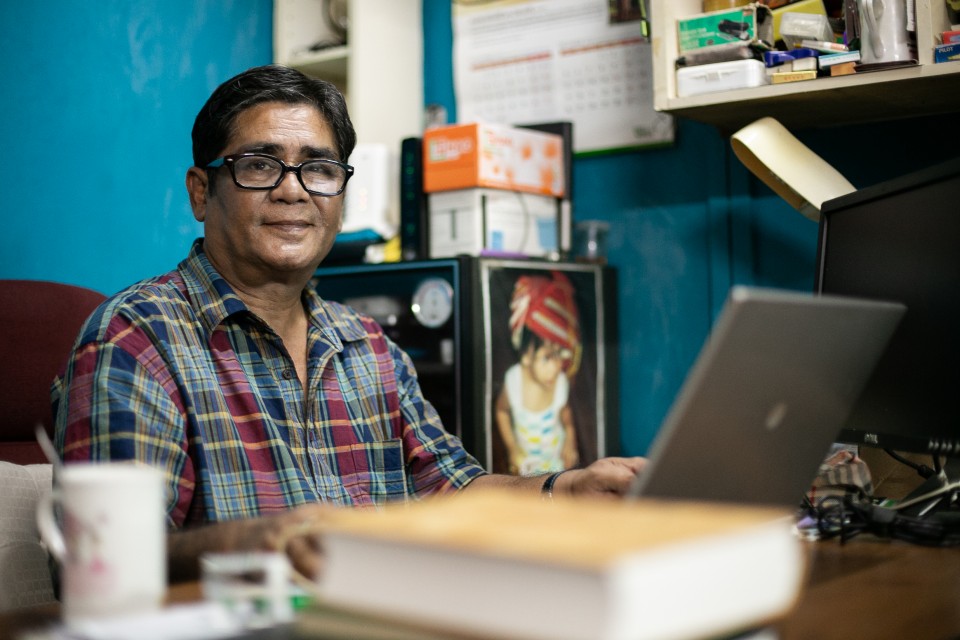 AKM Mohsin, editor of the Bengali monthly newspaper ‘Voice of Bengal’, published in Singapore, works at the newspaper’s office in the commercial enclave of Little India on May 22, 2022. (Photo by Wee Teck Hian)(Kyodo)

Despite struggling to survive amid falling ad revenue and sales due to the pandemic, the office, which had stopped receiving visitors due to the virus, is once again filled with laughter and jokes. from the Bangladeshi community.

On a Sunday evening in May, the moving timbre of traditional percussion and string instruments accompanied by a song broadcast from the store’s attic. Five Bangladeshi workers who were granted leave have reunited after a long period of separation. This night of frivolity provided only a brief respite from their six-day work week which sees them getting up at 6am and coming home at 9pm, but it’s been worth it.

A man sings the verse of a self-deprecating Bangladeshi migrant worker who struggles in a land far from his homeland while pining for a wife back home.

Mohsin regularly opens his office like this for Bengali poetry readings and musical performances. Before the pandemic, more than 30 people sometimes gathered there and some have even become poets and singers since returning to their home countries.

He believes the newspaper is not only a valuable source of information, but “a voice for the voiceless”.