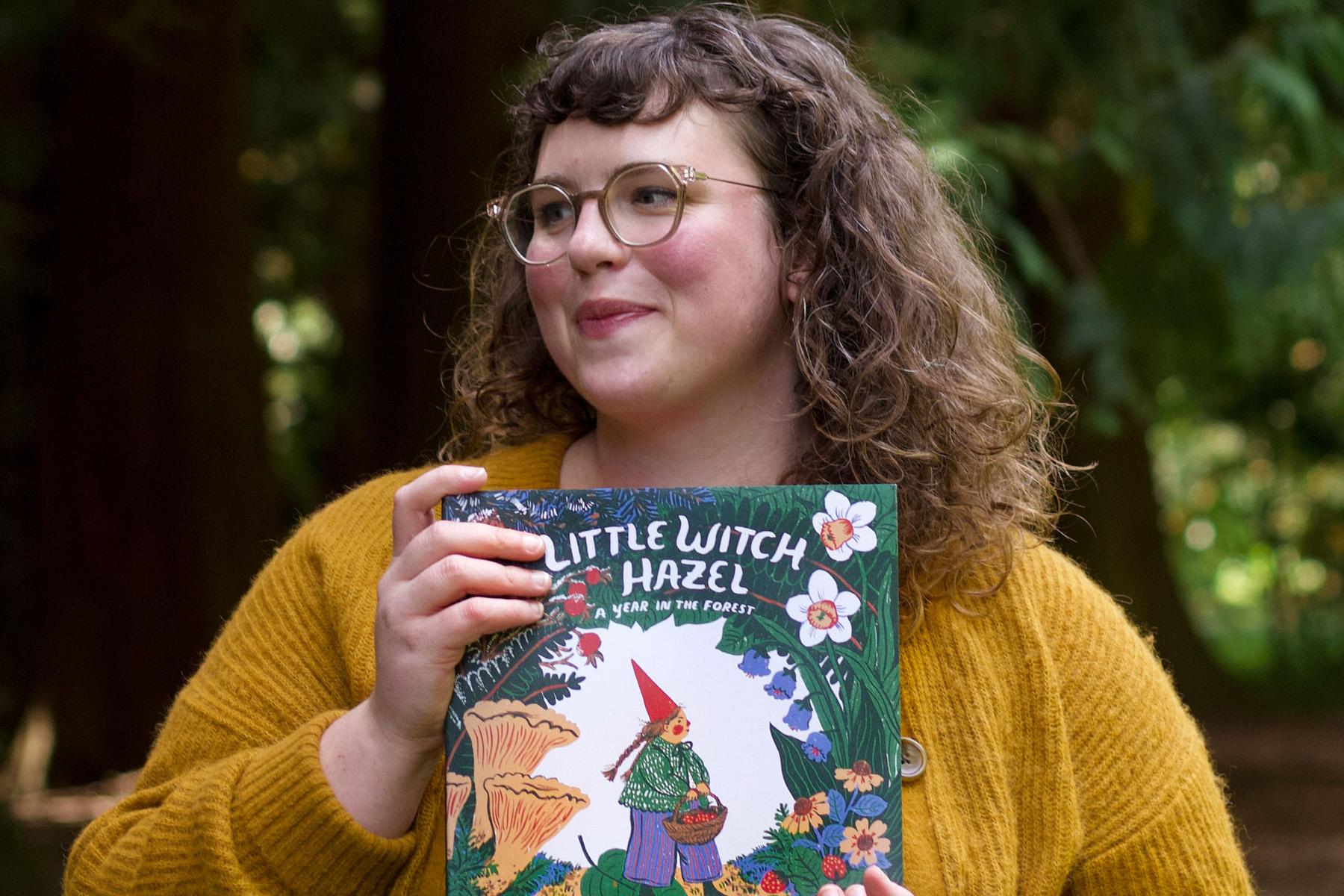 Phoebe Wahl has wanted to be an artist for as long as she can remember. Her unique childhood, growing up in the South Hill area of ​​Bellingham, fostered this creativity.

“My childhood had a huge impact on my artistic pursuits,” she says. “I was out of school for most of my childhood, which is a radical form of unstructured, child-guided homeschooling, so I had to really get into developing my skills and my interests from an early age in a way that I think many children are not. not able. Phoebe has spent countless hours in her garden, cultivating her mind.

She says she feels lucky to have had virtually unlimited time to be in her imagination, writing, acting and making art. “I think it prepared me perfectly for my career and my lifestyle as it exists today,” says Phoebe, “because in addition to allowing me to hone my artistic skills, it also gave me given a lot of time management practice.”

In high school, she realized that being an illustrator was a “thing” and decided to devote herself specifically to it.

Phoebe’s first children’s book, “Sonya’s Chickens,” received the Ezra Jack Keats Book Award for New Illustrator in 2016; a recent book, “The Blue House”, was named one of the best books of 2020 by Publisher’s Weekly, Kirkus Reviews and NPR.

Phoebe knew that if she wanted to go to college, it would be art school, as art was her most constant focus and passion growing up. And because of her non-school background, art schools rather than traditional colleges and universities seemed a better fit.

By the time she went to her college of choice, the Rhode Island School of Design, Phoebe knew she wanted to major in illustration. children’s books had become his main concern.

Phoebe began selling prints of her art – which has home, family, community and nature at heart – while still in college. After graduating in 2013, Phoebe moved to Portland, Oregon and also began designing and selling stationery, apparel and accessories. She returned to Bellingham in the fall of 2014.

Along the way, Phoebe became interested in surface design, meaning any kind of artwork – pattern, illustration, hand lettering, etc. – intended to be applied to a surface to improve its visual appearance and/or functionality, and began working freelance. for Taproot magazine. The magazine made a few products featuring her work for sale in its store, introduced Phoebe’s work to an audience happy to buy it. “It really just grew from there,” she said.

Today, as a surface designer, author and illustrator, Phoebe also creates ceramics and textiles. “I love that being an illustrator can really manifest as anything,” she says.

Phoebe opened a physical store in 2019. “Once my online store got big enough that I had to move it out of my house, I started thinking how fun it would be to have some sort of of small showroom for my products. .”

The first boutique opened on State Street in June 2019, and her current boutique, at 112 Grand Avenue, opened in July 2021. Alongside her own designs, Phoebe showcases work by other artists and brands that feel complementary to “his world”.

“I work with Carly James, owner of Bison Bookbinding & Letterpress, who has printed my work for years,” says Phoebe. “She joined me in my business just over a year ago and we physically merged the storefronts. It’s amazing not to do everything by myself anymore, I really like having a partner to exchange ideas and collaborate with.

“Two of the artists who really started waking me up to the world of contemporary illustration when I was a teenager were Rob Ryan and Carson Ellis.”

The literary world of writing and illustrating can be competitive, but Phoebe says she has a more internal relationship with ambition and competition.

“I don’t generally feel strongly drawn to being ‘famous’ or ‘successful,’ and I think that’s more and more true as I get older,” says Phoebe. “That being said, I’m sure I have moments of jealousy or pettiness or sadness if I don’t get awards or something like that. But usually when I feel competitive it’s a lot more of me wanting more of my own work, and my relationship with it, and comparing myself to others who might inspire me to push myself beyond my artistic comfort zones, which ultimately I think is a good thing, even though that’s not always comfortable.

Phoebe admits she is “amazed” by her success.

“I certainly didn’t expect it. I have a raging case of impostor syndrome and often feel very superstitious about having too high expectations of things, and these things combined often result in me being very surprised mostly when success happens.

Phoebe has done a fair number of book talks and says she loves hearing from kids who relate to her books or are affected in some way by her books. “I especially love when they share their own creative ideas and hear how my work may have inspired them.

“I also really like to hear from adults who feel seen by people or images of my work,” she says. “It’s amazing how powerful it can be to see your body or your identity reflected in art and it never ceases to amaze and touch me to hear from people the impact my work has had. “

At the time of this interview, Wahl is eight months pregnant. “I’m nervous and curious to see what maternity leave will be like as a freelance artist,” she says. “I hope I have strong enough boundaries to really take as much time as I need.”

She has several surface design projects to complete and turn in to her business partner, Carly, who will turn them into products in the new year: calendars, stationery, homeware, and more.

Also on the horizon is “Tulip”, the adaptation of Thumbelina Wahl’s short film co-created with stop-motion animator Andrea Love. It recently finished its festival and will be available on demand in 2022.

“I just finished editing the manuscript for my first long-form book project,” she says of an illustrated novel for young adults based on her high school journals. “I basically transcribed my diaries from when I was 15 and 16, then edited, added, and romanced them into a story.” It is slated for release in 2023 with Little, Brown & Company.

“I will also be illustrating and co-writing a part-fiction, part-non-fiction children’s book with Chronicle Books due out in 2024, but that hasn’t been announced yet, so I won’t say more.” , says Phoebe. . “The next few years are going to be busy!