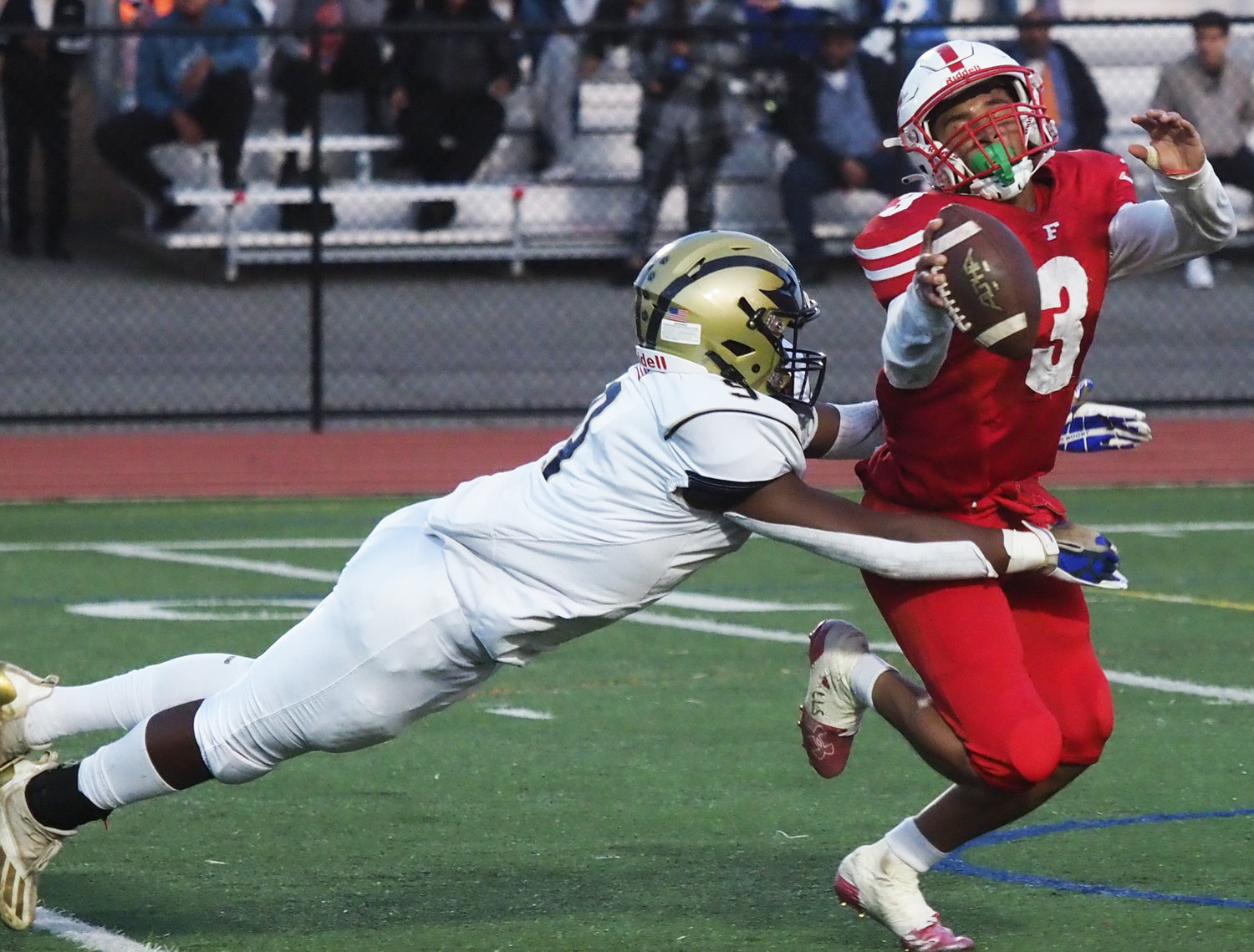 One of the best rivalries in Long Island high school sports added another chapter on Friday night with fifth-seeded Baldwin avenging a loss to Freeport a few weeks earlier with a 20-8 road win at a Nassau Conference I football playoff game.

The Bruins, who had lost eight straight in a streak dating back to 1924 and were shut out by the Red Devils on Oct. 22, scored on each of their first two possessions after defensive takeaways and never looked in back. Sophomore quarterback Vaughdrea Johnson, senior Cedric Jean-Pierre and junior Shane Mauldin had quick touchdowns, while junior Jadis Chenet had two interceptions.

“This is a huge win for our program,” Baldwin head coach Frank Chimienti said. “Freeport brought it to us a few weeks ago. They were much more physical and stopped our attack. We knew things had to be different this time around if we had to flip the script and our kids rose to the challenge.

Senior Anthony Byron added 173 rushing yards on 27 carries for Baldwin (6-2), who advances to the semifinals at Hofstra University for the first time since 2016 and will face two-time defending champion Massapequa next Saturday. at 8:30 p.m. No. 4 Freeport, which closed the regular season with a wild 54-52 double-overtime win over Oceanside, finished 4-5.

“It’s always tough when you lose,” said Freeport head coach Russ Cellan. “Baldwin outplayed us, so the credit goes to them. We settled in the second half and started defending better. We took the lead, but they scored again in the fourth quarter.

It was the 83rd all-time meeting between the teams. The Red Devils hold a 51-31-1 advantage.

Baldwin knocked out Freeport junior quarterback D’Angelo Gordon twice in the first quarter and quickly built a 14-0 lead. “Those were D’Angelo’s first two interceptions of the year,” Cellan said. “He was under a lot of pressure”

Johnson scored from a 1-yard run and Jean-Pierre from 2 yards. Bryon, who had one of the interceptions, had a two-point conversion after the first touchdown. The Bruins had a golden opportunity to increase their lead in the second quarter but fumbled at 1, and senior Nazair Jean-Lubin recovered for the Red Devils.

Freeport then ran 80 yards just outside the red zone before stalling on the downs, allowing the visitors to hold on to a 14-0 half-time lead.

“I thought our bending but not breaking defense there was the most important part of the night outside of our running game,” said Chimienti, who praised senior Rodney Mills’ relentless defensive efforts. Kwasi Bonsu and Lincoln DaCosta. “There was definitely a mental aspect to it,” he added. “We were inches away from being up three touchdowns, so it was important to hold them.”

Freeport struck in the third quarter with Gordon hitting Jean-Lubin on a 24-yard touchdown pass. Gordon also added the two-point conversion run to reduce the margin to 14-8.

“There’s such a great culture and coaching staff in Freeport, and they have so many outstanding athletes,” Chimienti said. “We knew it was going to take the 48 minutes.”