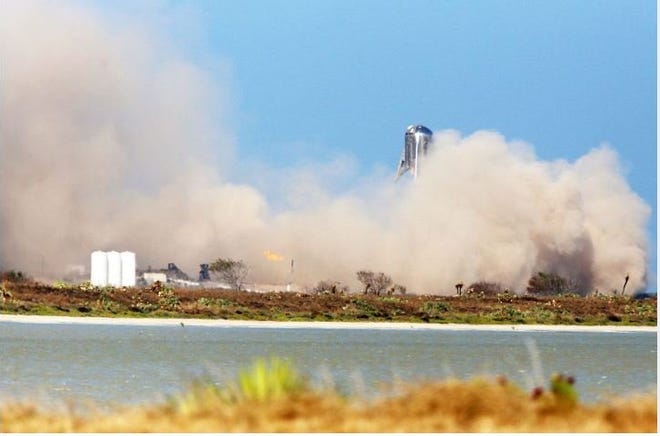 July 21 editorial, “Is what’s good for Musk good for Texas?”

The grand vision of frequent launches to the Moon and Mars from a futuristic spaceport with a complex seems to be fading.

In February, when asked about his “long-term” vision for the site, Musk told a reporter that he thought Starbase was “well suited to be kind of like our advanced R&D site.”

“I think Cape Kennedy will probably be our kind of primary operational launch site,” he said.

Musk often changes his mind, as we saw with the Twitter deal, but regardless of the future, we wonder if what’s good for Musk is good for Texas.—San Antonio Express-News Editorial board

On Thursday, nearly 400 people from the Dallas County Jail were waiting for a bed in a psychiatric hospital. This is because the courts had deemed these detainees incompetent, meaning they were not well enough to participate in their defense due to mental illness. Although some can afford treatment in a private facility, most of them have no choice but to go to a public hospital to recover.

Still, the state government cannot staff about a third of its psychiatric beds, according to a presentation to lawmakers in late June. Texas therefore shifts the burden to county jails, which have no choice but to house inmates until they can be placed in a state hospital or, in some cases, until that they’ve been behind bars for so long that they’ve essentially served time for a crime they weren’t convicted of.

The latter occurred with misdemeanor cases. Under these circumstances, the cases are dismissed and the detainees are released from prison. But then they don’t get the health care that could restore them and help them avoid another run-in with the law.

Dallas County wait times provide a picture of the seriousness of the situation. Inmates waiting for a bed in a non-maximum-security hospital waited approximately 20 days in 2017; now they are waiting 353 days. For men, the current wait is 401 days.

Men who need a bed in a maximum security hospital wait 822 days.

Heat is a hazard, in itself, across the world. It doesn’t need help lighting up.

Yes, we all love a manicured lawn, and there’s that yard debris or moving boxes that needs to be burned to ashes.

First, let the yard go or take extra care when mowing the yard.

Second, we are under a county-wide burn ban. This means nothing should be burned in our yards or pastures or even in a barrel or fire pit.

We can all take care to prevent potential wildfires, and if we start one, well, we could be held responsible, according to Kerr County Judge Rob Kelly.

Mother Nature doesn’t need any extra help, and our firefighters certainly deserve a break from firefighting.

— The editorial board of the Kerrville Daily Times

Re: Editorial July 21: “Is this awful summer heat the new normal? Here’s how Texas should prepare for the worst.”

It’s already a sweltering summer, even for Texas. Based on long-term projections of the effects of climate change, we will see more. It’s time for For tWorth and Texas to prepare better.

Heat waves cause myriad problems for residents, food and land. Over the past 20 years, Texas is second only to Arizona in heat-related deaths.

And yes, there is work to be done to ensure that our electrical grid can keep pace.

It’s slightly warmer in Phoenix, Arizona – we might consider learning from the folks there. The mayor has appointed a director of heat response and mitigation, someone who focuses solely on ways to deal with extreme heat.

— The Fort Worth Star-Telegram Editorial Board