Art, with an asterisk 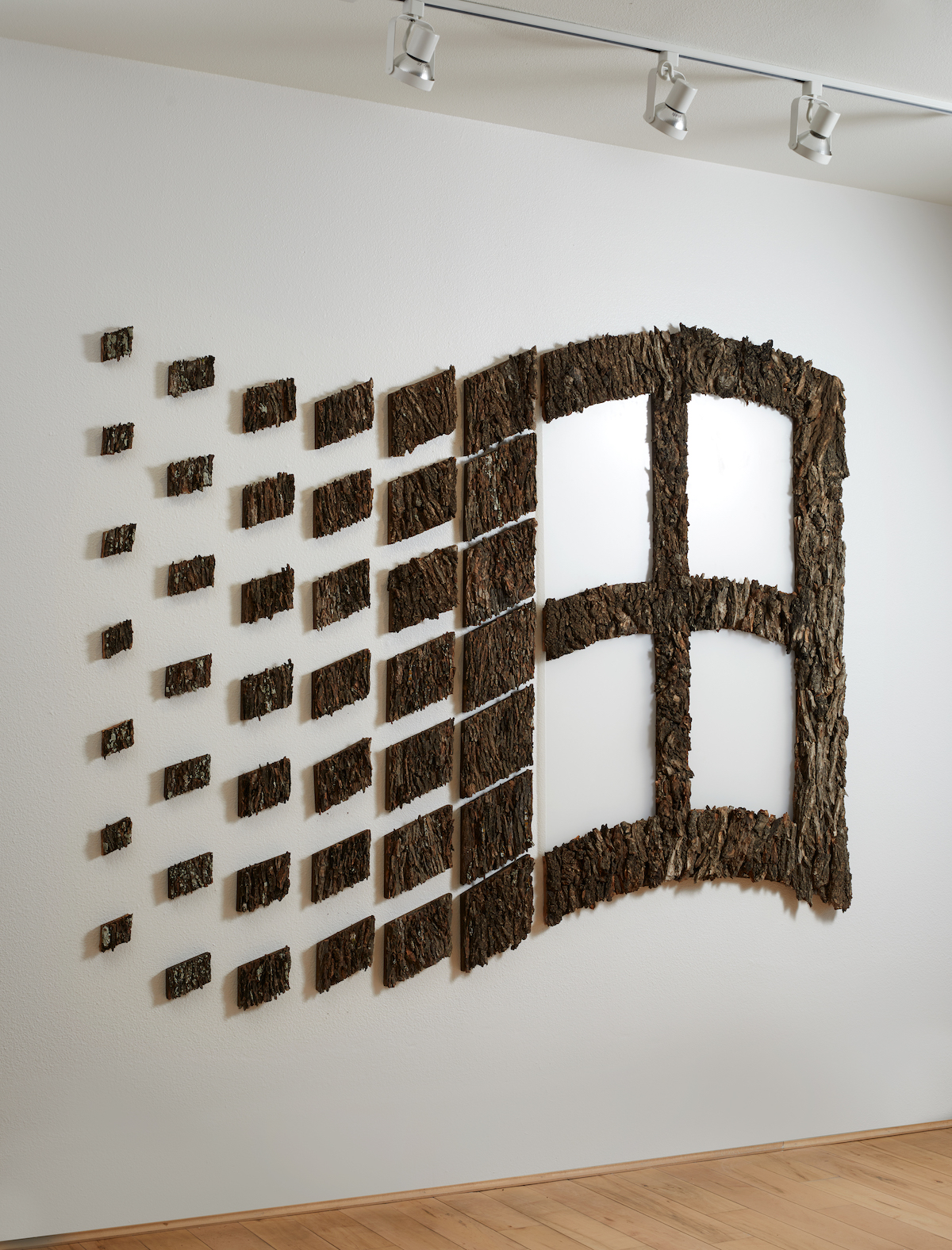 SANTA FE, NM — Asterisks are akin to marginalia, footnote, aside, afterword. Legacy Russell, curator and author of Glitch feminism: a manifesto (2020), focuses on her 2021 lecture “On Footnotes,” in which she considers footnotes “as a conceptual and theoretical framework and a radical site of black, queer, feminist, and decolonized creative praxis.” An exhibition of three women at form & concept, ***, announces itself by means of these grammatical guidelines of divergence and presents the work of New Mexico artists Jami Porter Lara, Erin Mickelson and Kate Ruck.

The gallery is sober and dark at first sight. Porter Lara’s “Terms and Conditions” (2021), a slowly flashing neon asterisk, casts an insistent electric white glow across the room. The exhibited works are based on and around language. They confront, according to the press release, “paradigms of art space as white space and identity as fixed or nameable… The artists are connected by their explorations of heritage, heritage, indigeneity and whiteness”.

Asterisks are the vernacular territory of structural change and world-building. And they can be frisky. Vanishing Point by Kate Ruck (2022), tall and odd, features a bark-laminated bas-relief of the vintage Microsoft Windows logo. The change in material and scale makes the cultural icon almost unknown. Ruck works between New York and New Mexico, studied video game design, and ran the studios of hard-hitting artists Camille Henrot and Charles Ross.

Ruck’s sculptural objects mediate today’s IRL experience: AFK’s unsolvable blend – an acronym for “away from the keyboard” originating in 1990s online chat rooms to explain the state of being between the digital and analog worlds – and the construction of digital identity. Ruck’s other sneaky showtop “Speak, Friend and Enter” (2022) depicts an action card from a role-playing game that she transformed with a Jacquard loom into a tapestry, stretched and framed.

The card casually extols the virtues of the capitalist Anthropocene and includes Ruck’s imprint in the margins of mimicry. Lately, there has been an intergenerational resurgence of these original role-playing games. What is most surprising in Ruck’s works is his embrace of haptic materiality (fiber/soft and bark/rough) which creates a counter-body to the luster and screens of digital life.

The asterisks therefore also indicate a study. Erin Mickelson, Santa Fe-based book artist, printmaker and publisher, lowers the tone in the room. His formally minimal works span blind relief letterpress printing, etched plexi, gilt feathers, and a room-centered accordion book. Mickelson’s handmade book “Trace” (2021) serves as my key to his other works. She dedicated the book to Gertie Jordan, “who kept her Oneida language and survived her years at Carlisle Indian School”.

The book proposes that the text be experienced as a body, each page of the star-shaped book presenting words that constitute parts of the human body: in bold, the Oneida language that Mickelson learns, and in subscript, its translation into English. This work shares an impulse with the sacred forms and functions of art, devotion and study. Art here is an intimate learning tool to connect with ancestors, past and future, and to turn trauma into a tool.

Finally, Jami Porter Lara, a concept artist based in Albuquerque, wields the asterisk as a warning sign. “We’re Just Not Going to Talk About It” (2018), an edition of framed lithographs in white ink on white paper, channels the undersides of unchecked collusion and racism. Viewers can be seen adjusting and contorting their bodies to convey the message.

Concealed in plain sight and difficult to pin down, the text requires a negotiation of its readability. What is left unsaid in these missives, the omissions, speaks to the violence of Eurocentric white centrality – in art histories, institutions and this country in general.

Porter Lara’s ambitious, site-specific mural, “Wall Drawing 305: The Location of 100 Random Specific Points of Whiteness (after Sol LeWitt)” (2022) channels the conceptual practice of decentering for which LeWitt has become known. The drawing traces his personal biography as a dispersed, non-linear, queer and mixed-race map of relational points. The strength of the work is its keen awareness of debt as a racialized core of American history. I’m thinking here of Fred Moten and Stefano Harney who led legions in this talk with their PDF/video and book, respectively, The university: final words (2020) and The Undercommons: Fugitive Planning and Dark Study (2013).

And by the way (because, asterisk), I can’t get rid of a particular Sapphic reference, perhaps as salient as LeWitt: that of Alice Pieszecki “chart” that (in)famously maps all of LA’s lesbian storylines on TV The word I. Can we ever truly escape our identities?

Can’t we? Ruck’s work invites roleplay and portals, Mickelson works in the popular medium of print and uses language as renewal, and Porter Lara questions shifts in the legacies of whiteness. Identity, like language and art, is a collective practice and is neither singular nor fixed. *** emphasizes the necessary changes in the construction of the decolonized world.

*** continues in form and concept (435 South Guadalupe Street, Santa Fe, New Mexico) through June 25. The exhibition was organized by the gallery.