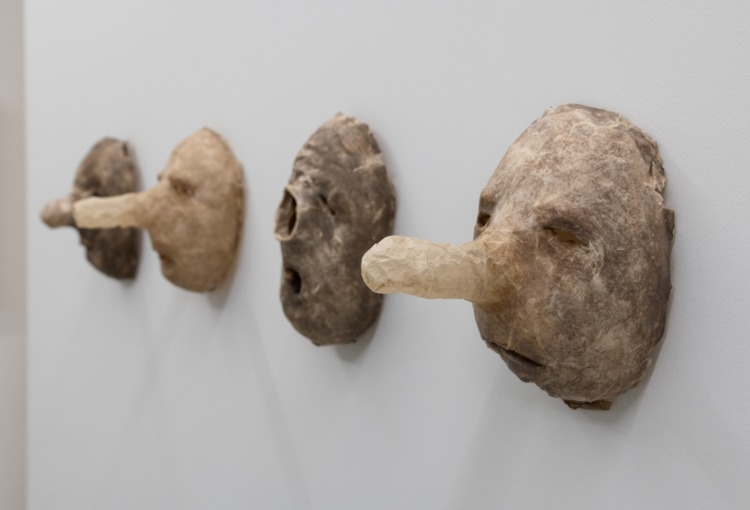 If I ever find myself thinking about paper or printed art, my mind hardly ever wanders off to ghosts. However, as I browsed through Stelo’s group exhibit, “Coalesce,” I couldn’t get the ghosts out of my mind.

On each piece of the show hangs the ubiquitous and disturbing spirit of a pandemic. This makes sense, given that at least half of the work on display was done after the COVID-19 outbreak. Regardless of their timestamps, each piece seems to fit together: the past lingers in the present, like a ghost refusing to leave.

Stelo, formerly c3: initiative, hosts rigorous and experimental residences at its Portland and Camp Colton sites – the former nestled in the historic blocks of North Park in Portland, the latter among the gaping evergreens and drooping ferns of Colton, Ore. . Established in 2014, the c3: papermaking residency was designed to “engage artists with little or no experience in hand papermaking. [to] give them the opportunity to learn the trade and push the limits of what the medium can do.

On view at Stelo’s Park Block until January 30, “Coalesce” presents rich examples of this. While the exhibit features a diverse and impressive selection of artists from Stelo’s 2019/2020 and 2020/21 Handmade Papermaking and Letterpress Printing Residencies, the idea of ​​’printing’ seems important to all. . More than that, a sort of collective consciousness feels oddly woven throughout the show – in one way or another, each artist considers the macabre afterlife of places, times, and things, a theme that resonates deeply in an era marked by so many losses.

But “Coalesce” doesn’t stop there. The typographic pieces of Demian DinéYazhi, for example, welcome each visitor at the door with a critical and claiming meditation on the future, in reaction against the injustices of the past. First of all, the expression “ALL the american flag is a Warning signIs repeated in red and blue ink on white paper and scattered on the wall like wheat-coated propaganda.

Bui’s other essential contribution to the show, pick up moss, spreads out the remains of a collaborative pulp drawing installation on the floor. I am told that during their residence, Bui left a bucket of pulp for passers-by to dig into and sink stone from a public walkway. Once dried and transported to the gallery, the result is an upturned, grassy and stony mosaic of greenish yellow.

Dubin is up to something similar in their Collaborative diptych # 2, which combines recycled bleached cotton, ash, soil and pond water from Stelo’s Wildest Campus in Colton, OR. This gray-brown paper does something unique in that it is reminiscent of the impression of a place, rather than the ink of a pen. Its materials – muddy mud, the skeleton of a leaf – perform the miraculous act of transporting the literal and earthy meaning from one moment and place to another.

In the north wing, the rooms of Amy Bay Soft blue, can I have a kiss? and Hush hush start with a similar, earthy ectoplasmic pulp, but paint with it instead. Combining pigmented cotton and hessian paper, Bay wonderfully arranges floral spots and spots, specks and petals of purple, yellow, pink and green, making the “canvas” and “paint” indistinguishable.

However, not all stationers agreed that places, times, and things live in the scraps they leave behind. Kim Varamini’s plays Atoll (Idiorythmic) are three-dimensional casts of found objects – seashells, rocks and cutlery to go – made using soft white Abaca, Kozo, Bull Kelp, and Kombu paper to capture the curves and edges of objects, long after the object and the casting have been separated. The resulting shells are as fragile as snakeskin. They also left me wondering where all the real stuff life bodies towards which these skins once enveloped have wandered.

Jess Perlitz’s haunting paper molds at the other end of the gallery create a similar effect. Almost like shrunken buds, these hollow abaca pulp shells are lifeless, even frightening. Two larger, swollen heads appear to float around the wall, while a series of smaller masks are lined up, aptly titled Body without body masks. They feel dead in a way that is both disturbing and convincing. I walked away wondering how often I look like this.

In truth, there are too many brilliant works in this exhibition to talk about in detail. Some of these ghosts you may need to visit yourself. If there is one thing that is clear to me after visiting “Coalesce” it is that the world remembers us after we leave. Spirits and specters may or may not exist, but the impressions we make of our lives endure long after we are gone.