APC could punish Tinubu for his comments on Buhari – Adamu 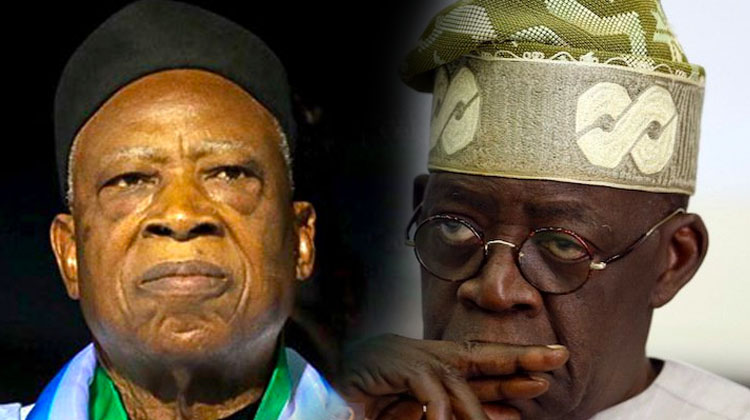 The leadership of the All Progressives Congress has said the party may punish its national leader and presidential candidate, Bola Tinubu, for his remarks about the president, Major General Muhammadu Buhari (retired) a few days ago.

APC National Chairman, Senator Abdullahi Adamu disclosed this on Saturday during a briefing to journalists at the party’s national secretariat in Abuja.

The punch previously reported that Tinubu during a visit to party delegates in Ogun State on Thursday, was seen in a viral video on Tuesday bragging about how he had helped President Buhari and some people win elections previously.

Although Tinubu released a statement on Friday to clarify his remarks about the president, Adamu however said the apology was not enough.

Adamu said, “It’s amazing how any other APC member would make that kind of comment under those kinds of circumstances about the president. We oppose this. It showed that he shows no appreciable respect for the office of Mr. President.

“That is why we want to make public that we are saddened by what we have seen in the video, in this report and we condemn it in the strongest terms. We hope he never says that stuff again, especially APC extraction for making such comments.

“Yes, yesterday we saw part of a retraction, but that effort is not enough. It’s not sincere. It’s not thorough enough. It doesn’t erase the impression that this event left in our minds.

On whether there would be any punitive measures against Tinubu, the President said, “At the time this event took place, the selection committee had not presented their report to us at all. And was trying to suggest that someone was threatened. So there was no justification for when this thing happened.

“This morning, we saw some traces of withdrawal of these statements. You see, these are statements about his intention for real action.

“Yes, we can’t say that we refuse not to see the papers. It happened. He said he had the utmost respect for the president. You see, in Hausa there is a proverb that once you have grabbed any amount of grass from a thatched house and pulled it off the roof, you cannot not replace the same amount of grass. What came out came out.

“What he said was not an apology. It’s like trying to recant and you say I didn’t mean it. It’s a misinterpretation issue. It’s not a regret.

“If it is necessary to penalize a party member, not just Bola Tinubu, anyone, we will bring them to the party register. Anyone while we watch events as they unfold. occur.