Ambassador to Albania reflects on career in foreign service 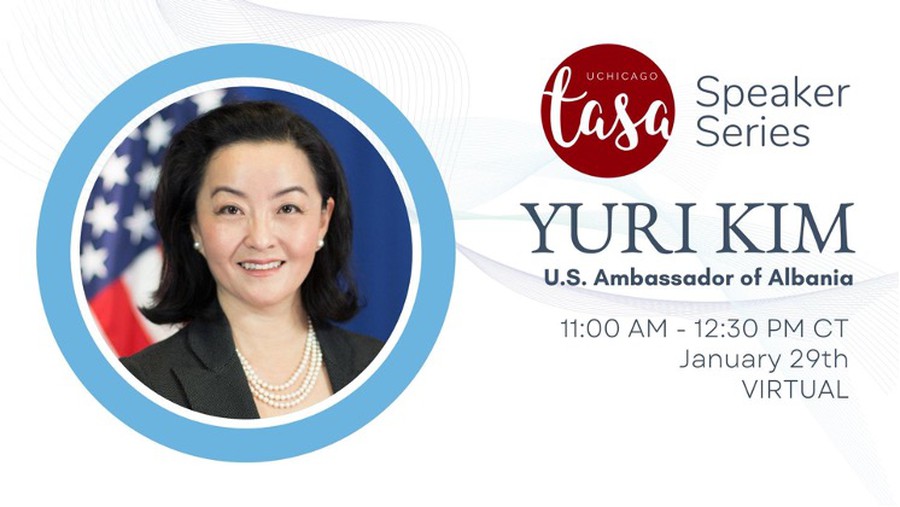 On Saturday, January 29, U.S. Ambassador to the Republic of Albania Yuri Kim addressed students at the Taiwanese American Student Association’s Virtual Lecture Series. Kim reflected on her past experiences, offering advice on finding her way after college and dealing with the challenges of being a minority figure in the workplace.

Kim, who was born in Korea and moved to Guam as a child, is the first Korean-American woman and the first person from Guam to represent the United States as an ambassador. Prior to this position, Yuri held many other senior positions in the State Department and has worked on key foreign policy and national security issues in Europe, Asia and the Middle East.

Kim earned a BA in political science from the University of Pennsylvania (UPenn) and hoped to pursue a career in law. However, after failing to get into the law school she wanted, she ended up at the University of Cambridge, where she earned her M.Phil. in political theory. “The best success often comes from failure,” Kim said.

After her time at Cambridge, Kim returned to UPenn to find a job that would allow her to see the world. “I was waiting to speak to my counselor, and while I was in the waiting room, something caught my eye,” she said. “There was a pretty colorful pamphlet, and it turned out to be the Foreign Service Examination pamphlet.”

Kim began her career in foreign policy in Beijing by taking Chinese lessons, then she served as a politico-military officer in Tokyo. She then returned to Washington DC and served as Special Assistant to Secretary of State Colin Powell. “I learned a lot. Part of it was seeing the places, but a bigger part was meeting people in those countries and other members of the State Department,” Kim said.

From there, Kim served as a political officer in Korea and later as a member of the US delegation to the Six-Party Talks focused on denuclearizing North Korea. She has been to North Korea several times, sometimes even on her own. Kim said, “I knew Korea through the eyes of a Korean child, so going back there as an American diplomat and being able to see Korea from another perspective was really eye-opening for me.”

However, Kim didn’t want to be known as “the Asian guy who just did [East] Asia.” She pledged to travel to Iraq to serve as a political adviser to the United States Embassy in Baghdad. “For a year, I lived in a place where bombs regularly exploded, and I called my family at home to calm them down,” Kim said. “When we got a warning that a mortar was coming, we would climb under the bed or get into the bathtub to maximize the chances of survival.”

Kim’s frequent travels made him realize the value of observing different cultures. “Being a diplomat is about learning the language, both figuratively and literally,” Kim said. “And my background as an immigrant had a huge influence on my relationship with the world and my relationships with other people.”

After her time in Baghdad, Kim worked in Turkey for three years as a political adviser at the US Embassy in Ankara. From there, she assumed her current position as Ambassador of Albania, Personal Representative of the President.

“The most rewarding part is being able to represent the country I love so much,” Kim said. “It’s amazing to be the person who can sit in front of the American flag.”

As an Asian-American woman, Kim is usually outnumbered in a room, but she doesn’t let that drown out her voice. “Ensure your rights and don’t accept injustice as a culture,” Kim said. “If you artificially suppress half of your population based on gender, you are depriving yourself of talent, work and ambition.” She also stressed the importance of having allies in these situations. “A lot of times when you’re trying to change the situation, it’s really important that people stand up for you, but you also have to be able to stand up for others,” Kim said.

While talking about her assignments and travels, Kim continually emphasized the value of seeking new perspectives. “Life is full of surprises, and if you’re open to those new experiences, they can be wonderful,” Kim said. “As you go from experience to experience, try to build a story.”