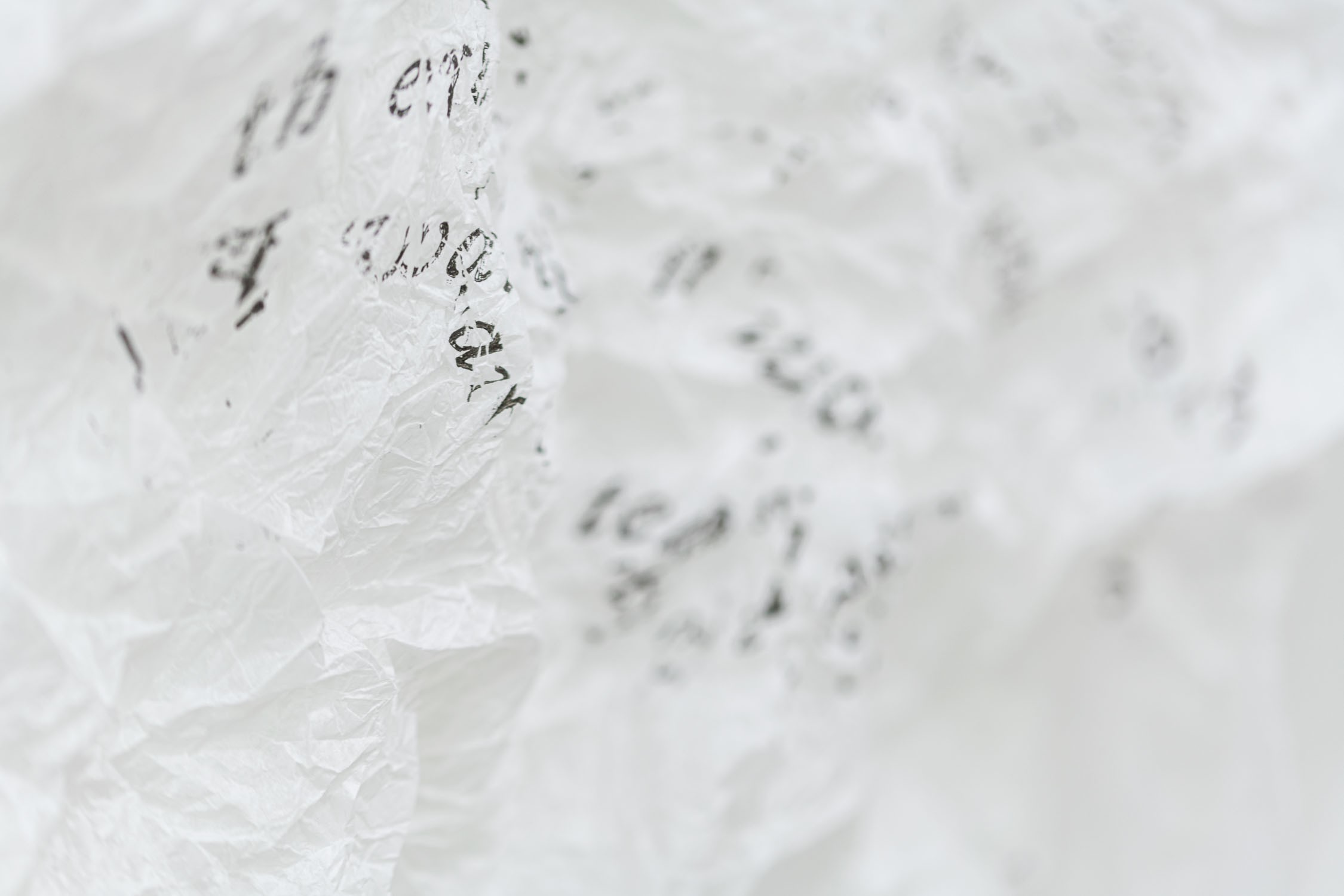 There’s a piece in Alyson Provax’s new exhibition of textual works, “There’s So Much I Want to Tell You,” that you can only read if the right gust of wind strikes. Towards the back of Well Well Projects, you’ll find a stack of sepia paper pinned to the gallery wall, each piece as thin as the skin of an onion. The sentence on the topmost sheet reads: “I want to know that you know” in letters printed in a crisp serif. The paper is translucent enough to indicate the presence of other messages, but not so translucent as to reveal what they are.

My grandfather, who was an art restorer, taught me never, never, already touching anything in a gallery, no matter how desperately I wanted to, and I’m nothing but his faithful pupil. But I will admit to having passed very quickly in front of this room to see if I could make the leaves fly. They did, but all I could see was an upside down sentence on the second page. I have no idea what he said or what lies beyond.

Untitled (I wanna know you know) is the centerpiece of the show. For years Provax has toyed with ways to occlude text – hiding it in the gutter of its artist’s book so you have to break your back to read it, layering it so densely on paper that it is almost illegible – in order to delay the viewer’s understanding, to hide something from us, to force us into a disturbing uncertainty. But never like this. Never without the ultimate possibility of discovery.

This restraint brings out a nostalgia in the viewer, an almost insatiable desire for understanding and clarity. Provax elicits these feelings by playing with the vagueness of language. In her artist statement, she writes, “At best, imprecise language can be a way to point to a feeling that is too broad or too complex to truly share.” She adds, “I’ve been thinking about projection and interpretation: how much of the relationship between you and me is between us, and how siloed is it inside of ourselves. .” Do we really understand each other or is all communication subject to distortions?

Throughout the exhibition, Provax overcomes our frustration and desire in different ways. To create the show’s eponymous artwork, Provax crumpled up a 24″ x 36″ piece of tissue paper, then printed the phrase “There are so many things I want to tell you” on it. After printing, she opened the crumpled mass until the letters could no longer be pieced together by the viewer. It is the most three-dimensional work in the exhibition, teasing the contours of our need to understand and to be understood.

Two works in the exhibition feature a paper called Tengucho commonly used by archivists to protect old documents and prints. It is a paper that lives among other pieces of paper in sterile rooms, touched only by white-gloved hands. Its weight is somewhere between a cobweb and a fabric, so delicate that the tiny magnets that Provax uses in its workshop to fix works in progress to the wall have torn through. By printing on it, Provax takes a material whose only value to the world is relational – it only exists to preserve the life and meaning of other things – and gives it a purpose of its own.

One of these works is the diptych Untitled (I want, you know, that) in which overlapping sheets of Tengucho – printed using the aforementioned crumpling technique – create an echo that can be read in all directions:

You know I want this.

You know I want you.

Although Provax continues to push the boundaries of obfuscation in her 2D works – creating more textural pieces than I’ve ever seen of her – it’s those sheer 3D works that are the most exciting to me, in part. because they are the biggest. departure from his previous job. Typography, by its nature, is limited, finite: the inked characters touch the paper to make a discernible mark. These pieces of gauze are like steam. They give the impression of entering a room after someone has whispered a secret there.

Provax’s 2021 exhibition at Well Well, a two-person exhibition she collaborated on with Seattle-based artist Serrah Russell, lingers in this one. Together, the two artists created a whole corpus of works by correspondence. It was during the early days of the pandemic, when we were all reaching out, trying to find connection in any way we could. Provax and Russell each made work and sent it to the other without expecting it to arrive (the artists incorporated “postal changes” that occurred along the way into the final work) or what the other person would do with it. Provax letterpress on some of Russell’s collages. Russell created collages using elements from Provax’s typographic pieces. Most works, however, were sent from artist to artist, living in the recipient’s studio for months, unaltered. They both spent the entire collaboration period surrounded by the other person’s work and none of their own except for the piece they were currently working on (Provax told me she forgot what she had done until all the works were brought back to Portland for installation). As such, the influence of each artist’s work was deeply apparent in that of the other, bridging the 175 miles that separated them.

This sense of correspondence carries over to the current Provax issue – in the form of a ghost book (above) with one of its pages hanging halfway, and in the aforementioned stack of papers that we don’t we’re not allowed to read – but instead of communicating with Russell at a distance, she seems to be communicating with us across time, struggling with the limits of expression.

For me, one of the characteristics of a great artist is that each of their pieces is instantly identifiable. That doesn’t mean they have to continually repeat themselves, playing their greatest hits like aging rockstars. On the contrary, it demonstrates that the guiding line of their vision is so distinct that it can be felt and seen no matter how much their practice changes direction. Since I started following Provax’s work in 2016, she’s hidden typography in fortune cookies, splashed it onto bus benches and billboards, and woven it into blankets. His materials are constantly changing. But each piece is unmistakably his.

Often when we love an artist’s work, we want them to continue to do so exactly as they are so that we can continue to love them exactly as we love them. Provax’s work is virtuosic in that the more it changes, the more inevitable it seems. And at each new turn, it takes us with it in all our gripping desires.

“There’s So Much I Want to Tell You” is playing on Well Well Projects through August 28.
This article is co-published with OUT OF THE BOX.