Alithea O’Dell, creator of Anchorless Prints, is a 36-year-old typesetter and printmaker and a graduating student at Evergreen this spring. We had a masked and socially distanced conversation in her outdoor garage workspace, while her close friend Kim worked diligently in the background.

What brought you to Evergreen?

Before going back to school, I had a lot of creative or project management jobs, but I didn’t do a lot of artistic stuff. I worked as a visual merchandiser, did window displays, was a wedding and event planner where I did cool flowers and setups. I’ve always loved the visual arts, but I didn’t feel like an artist. I really liked engraving and typography. I learned to do screen printing in high school, but I didn’t learn it. When I was in my very early twenties I started learning about typography and just thought it was a really wonderful process; it’s very romantic to see the printing presses running. At the time, I was living in Seattle, and opportunities to learn typography were rare and expensive. I just learned everything I could about letterpress printing before I hit a press. About five years ago I restarted my life and came back here to where I grew up. I decided to study typography and printmaking because I had nothing left to lose. And at the time, my plan was to get a degree and get an administrative job for the state because they only want you to have a four-year degree and they don’t care what that is. is. in the engraving!’ I really wanted stability, I didn’t necessarily expect to be good at it or think of it as a career. But by the time I got to Evergreen, within about three months, that had changed and I was like, “I don’t ever want to work at a desk again.”

It does. And also when I went back to school in Evergreen, because I grew up in Olympia and my mom went to Evergreen, my dad went to Evergreen, my sister went to Evergreen, I’m very familiar with the ‘school. I’ve seen so many people dedicate their time to higher education at Evergreen and not really know what to do after that. We’re kind of a small town, there’s not a ton of industry here, you can work in services for the rest of your life and that’s fine, but I went back to school to get some stability and having – just more stability than I’ve ever had before. So when I started at Evergreen, I made this conscious decision to start building as wide a network as possible. I did residencies in Baltimore, I went to Penland (School of Craft) in North Carolina, I did stuff with the School of Visual Concepts in Seattle. I’ve done my best to build a creative community that goes far beyond Olympia, so when I graduate I’ll already be on a lot of people’s radar. Because the probability of succeeding in the long term at Olympia if I hadn’t done it would be very low. I saw my return to Evergreen as an opportunity to live all those dreams and do all those cool things that I wouldn’t have been able to do if I hadn’t been to school.

It seems like having that time before doing all that other stuff was really important so you could come to Evergreen and know what you want out of it.

Evergreen is an excellent exploratory college. But I think he does his best for people who know what they want. And I can hear Kim laughing because I’m a Capricorn. But I spent fifteen years as a working adult feeling rather apathetic and not really attached to anything, knowing that I wasn’t succeeding in a way that made sense to me. It was an opportunity more than anything, nobody tells me that I have to go to school, I know that I don’t need to have a university degree to have a career. I was like, ‘I’m going to take loans, I’m not going to work full time. I will maximize this as the wonderful opportunity that it is.

When did you start at Evergreen?

I started in the fall of 2018. Before going to Evergreen, knowing there were technical skills I wanted, I spent three quarters at SPSCC. I took advanced writing classes and a bunch of math classes because I wanted to improve in those areas in a very direct and contained way, which is not what Evergreen offers. It was the best choice I could have made, SPSCC is a wonderful college with lots of amazing teachers who absolutely don’t have to teach at a community college but choose to. That means I never struggled with how to write a bibliography or anything like that.

It’s really impactful. More directly on your art and inspiration, it seems like you have a wide variety of impressions that you make.

I do. When I was at Evergreen, physically, before, I was doing a lot more traditional prints. When we went into confinement I didn’t know when I was going to have access to school again, I had no press. Typography is not something you can do in your kitchen. You need a lot of space. I don’t like the “someone made the best of a bad situation” narrative, because it’s a bit too complicated for me. What happened was a perfect storm of terrible things that left me with some money, in terms of a raise and financial aid and reimbursement from Penland, where I was supposed to spend ten weeks but we were sent home. I had saved all that money, so I got it back. I decided to buy a press and try to establish something one hundred percent reliable.

I have always loved greeting cards for several different reasons. One, I love all kinds of office supplies like a micro-serotonin spark. It’s so interesting to be able to look at these consumables that are mostly created to create or affirm an emotional connection. I really like independently made greeting cards that are a bit funny and quirky. When you think of Hallmark greeting cards, they use this term “universal specificity” which is basically “how do we write something that’s going to resonate with the most people.” I’m thinking about specific specificity, unique specificity, creating things that don’t necessarily resonate with everyone but resonate with certain people in a way that’s really empowering. I think it’s an amazing thing that can be made in this really interesting and unique craft way and then traded between two people. There’s a lot of research on how people look at greeting cards because they’re saying something they think they couldn’t say on their own. There is an opportunity to push the dialogue about emotional connection in a format that is familiar to people. A greeting card is not uncomfortable to buy or receive; you understand the cultural exchange that occurs at that time. I just leaned really hard on it. The other side of that is that there are a lot of really wonderful burning processes that can take place using this press. So I am able to do more theoretical work too. I’m a bit of a process nerd, I like to push what the thing can do. Because I print a ton of greeting cards and really know everything my press can do, I’m able to do more elaborate and interesting print work.

I would like to know more about the theoretical side of your work.

What I’m currently working on is a sort of pop-art Vanitas series of prints. The Dutch still life motif, where they use these very symbolic images of a candle that is blown out and a skull or rotten fruit or a lot of things that tell a story in a cohesive way. I have always loved these paintings. I also knew from working with flowers as a wedding planner that when you have a large order of flowers together, if they start to rot, it radiates. What rots near you will also rot you, which is reflected in more sociological ideas like where you grow up and what that creates in terms of income stability, access to different opportunities, those environmental things. Also think about the generational trauma and the delicacy of people. Then there’s that other layer of thinking about underwritten femininity and tenderness. Think about the differences between prescribed femininity and subscriber femininity. I like pictures of flowers like those really delicate things that are so affected. It’s the most theoretical stuff, it’s a bit muddy. Dutch still lifes are very detailed, they are really big and they are very dark. My take on these are individual elements and they’re very bright, it’s a lot more pop-art, but they still tell this overarching story of these ideas of rot and resilience and storytelling. It’s funny because even though these things are very different when it comes to greeting cards and that, the common thread is the affirmation of an experience and the acknowledgment of a common history. It’s a very intentional decision for me to work in a way where I create a lot of objects because it’s an opportunity to make art as inclusive as possible to the extent that who can and can’t own art. ‘art.

We kind of touched on it. I had a big advantage in knowing what Evergreen would and wouldn’t offer me. Seeing this as an opportunity to do those things that cost money that I otherwise wouldn’t have was one of the best decisions I’ve made. It means that I’m pretty fearless and safe in what I do. Thinking of Evergreen as an opportunity to really spread your wings is something I highly recommend. 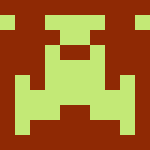