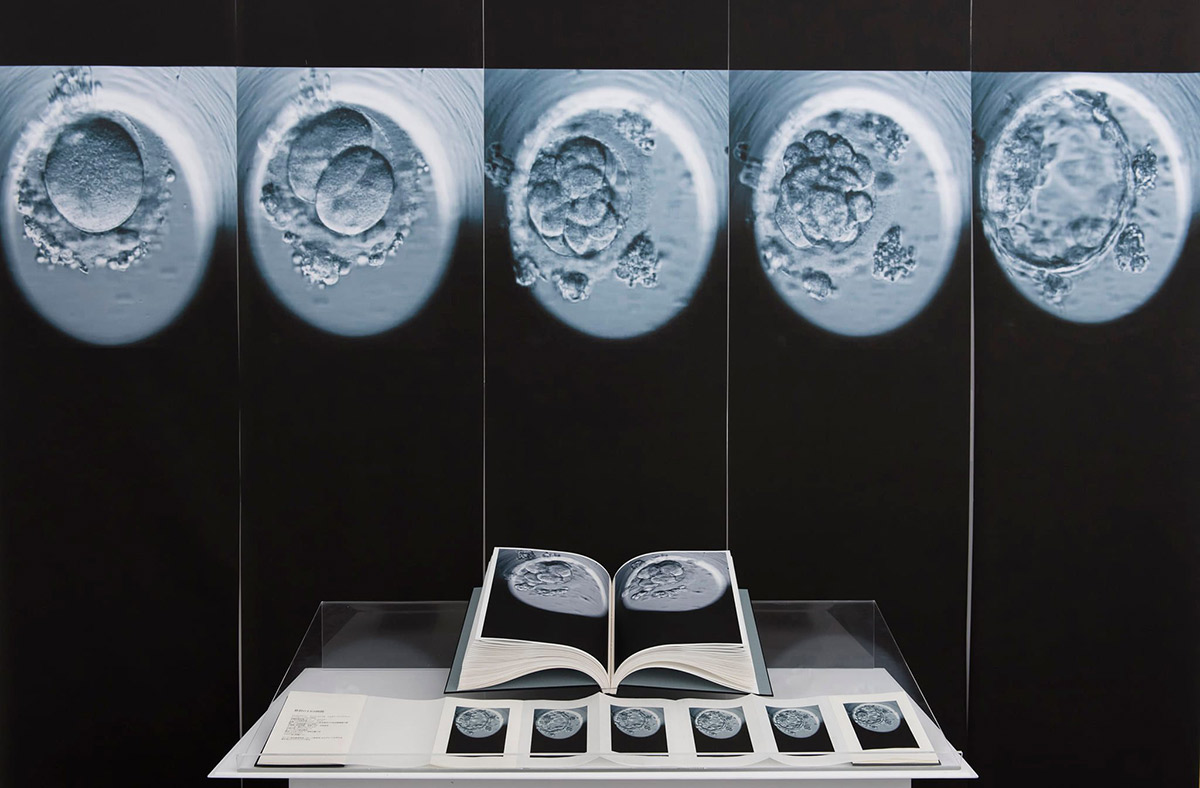 Reed art teachers and alumni explore biological fluxes in a new exhibition to coincide with the Venice Biennale.

Like any Reed professor, Prof. Geraldine Ondrizek [art] is a teacher-researcher. So when the European Cultural Center (ECC), an international cultural exchange promoting contemporary art, approached Ondrizek to exhibit her works in a biennial exhibition, she replied: exhibit her works, as well as those of her former students.

The exhibition, titled Transitions and transformations: the constant flow of our personal structures, explores how environmental factors, such as climate change, environmental degradation, and socio-political factors, such as forced immigration, homelessness, and political instability, biologically and genetically impact all living organisms. “These works not only show difficult situations, but emphasize the metamorphosis and resilience of living organisms and ecosystems,” writes Ondrizek in the exhibition catalog.

Artwork by Reed alumni would be perfect candidates for display, Ondrizek thought. “I encourage them to create works that have social, political and personal significance,” she says. She calls her recent students “agents of change” who often combine their artistic practice with activism, social justice and political engagement.

Ondrizek succeeded. The exhibition, which opened on April 23 and takes place at the same time as the famous Venice Biennale, presents the works of Ondrizek, visiting professor Barbara Tetenbaum [art]and eight Reed alumni.

The exhibition emphasizes the long-standing ability of the fine arts to be a mechanism for political and social activism. Ondrizek’s art explores the first 100 hours of in vitro fertilization through bamboo paper and silk-bound artist’s books, as well as silk panels and film. The exhibition of Stephanie Gervais ’09, badrtells the story of a South Sudanese man living in a refugee camp with a quilt embroidered with Arabic script telling his story, combined with an audio recording of him speaking. Photo transfers, accented with gold leaf, depict the genre transition of Mr Prull ’19. The films feature works by alumni who could not be on location, including the large banners of Paulina Joy Poleyumptewa ’21, displayed in Portland, Oregon, in the spring of 2021, exploring the concept of Indigenous identity and critiquing colonialism; and five films, whose genres include documentary, telenovela and drama, directed by homeless youth and produced by Nili Yosha ’07. The films depict the daily life of homeless youth in Portland. Yosha is the executive director of Outside the Frame, a Portland-based nonprofit that teaches homeless youth filmmaking skills. Ondrizek “could have had the whole gallery to herself,” Yosha said. “But she invited her students to participate with her. I, in turn, presented the work of my students. An artist herself, she calls her students’ films “the best of my work.”

Transitions and Transforms is a complex and non-traditional show, but the design of the exhibit mimics the themes of the artwork, which reveal that “we are extraordinarily vulnerable,” Ondrizek said. “We have to realize that transformation is going to happen whether we like it or not.”

Although the selection of works by Ondrizek by ECC curator Lucia Pedrana was a driving force behind the exhibition, many connections to the Reed community made it possible. Paid for with grants and sponsorships, including the Oregon Arts Commission and the Ford Family Foundation, the exhibit was also funded by Norman Packard ’76 and his wife, Grazia Peduzi, who helped sponsor three artists from the show who exhibit through their nonprofit, The Emergent Art Space. Transformations and Transitions is the sixth edition of “Personal Structures”, which the ECC organizes every two years. The exhibition takes place at the same time as the Venice Biennale, the largest and most prestigious international art exhibition in the world. This Biennale is historic: for the first time in history, a woman curated the exhibition, and more than half of the participating artists identify as women and people of color. dr. Jane Chin Davidson ’01former student of Ondrizek, will animate a symposium on Transitions and transforms in Venice on September 22*, with the participation of the alumni artists in person and via Zoom. “We have an opportunity to deepen these narratives,” Davidson said, including “different potential” around climate change, political instability and social upheaval. “That’s what the potentiality of art is – imagining and getting out of those boxes.”

The exhibit ends Nov. 27, and Ondrizek hopes the show will come to Reed in August 2023.

*To register to participate in the symposium, transitions and transformations, September 22, see the event website.

Greta Fieweger ’21 created an artist’s book and cyanotype on textile for “I Stand in My Arms”, which explores how textiles and books come into contact with the human body and “degrade, warp and disintegrate” over time. of time, and how this process affects the medium’s ability to “evoke memory and signify meaning”. See Greta’s website.

Mr Prull ’19 created a series of Xerox transfers and 22-karat gold leaf on paper in “Metamorphosis: Forms 1-5,” which is his artistic response to gender transition during the most isolated months of the COVID-19 pandemic. The technique used for the photo transfer process is “imperfect”, leaving gaps and holes in the images, where he applied gold leaf. “Even in the imperfections of self, in the hard places, there is beauty and value.” See Mr.’s website.

Ethan Rafal ’07 photographed landscapes destroyed by forest fires, impacted by extreme seasons due to climate change and environmental disaster. The prints for “The Evening Pink” were made from film exposed to smoke, heat and weather. See Ethan’s website.

Stephanie Gervais ’09 created an artist’s book, an embroidered quilted cover and a sound recording for “Badr”, which depicts daily life in a refugee camp. The embroidered text on the cover was written, in Arabic, by Badr, a man from South Sudan who spoke to Gervais in 2018, and tells his life story. See Stephanie’s website.

Lila Roo Duncombe-Lieber ’08, based in Saint Vincent and the Grenadines, contributed two works of art. A documentary video, artist’s book and weaving feature the work of New Roots, founded by Duncombe-Lieber, a youth empowerment program that supports the heritage, ecology and sustainability of St. Vincent and the Grenadines. “Womb,” consisting of an artist’s book and weaves made from discarded plastic, was made after Duncombe-Lieber suffered a near-fatal ruptured ectopic pregnancy. Check out Lila Roo’s website and check out the New Roots documentary featured on the show.

Nili Yosha ’07 is the executive director of Outside the Frame, based in Portland, Oregon, which gives cameras to homeless youth and teaches them filmmaking skills. His five documentary films tell the stories of five homeless young people: Last dayz, 2021; animal control; 2021, The tree that gives, 2019; Warriors (it’s a wonderful life) 2019; Hairapy, 2017.

The exhibition of Paulina Joy Poleyumptewa ’21, titled “rez nullius:Indigenous Identity-Creation,” is a documentary video showing the display of large-scale banners, displayed in Portland, Oregon in April and May 2021, exploring the concept of Indigenous identity and critiquing colonialism. See his documentary video and website.

Works by other contributors to the exhibition.

Vikrant Kano, explores the continuing legacy of the partition of India and Pakistan in 1947, forced migration and homelessness, and the resettlement and displacement of one’s family, “an almost perpetual and physical state of transit”. His exhibition, “In Search of Home”, is composed of an artist’s book and a documentary video.

Sai (surname removed) documents the unrest following Myanmar’s 2021 political coup in “Trials of Absence,” which includes archival digital prints and a documentary video, through the narrative lens of her relationship with her father, who is imprisoned as a political prison, while his mother is under 24-hour surveillance.

Jayeti BhattacharyaThe exhibition “Interference: Where Do We Belong?” is a collection of drawings, as well as an artist’s book, references the 1947 partition of India and Pakistan and considers “how certain political and social decisions affect the lives of commoners without their consent.” See the artist’s website.

Sara Olivia Fuentes and Fernanda Oyarzun The artist’s book, photographs and video including “Simbiosis: Mujeres Creadoras de Cordillera a Mar” document the artist’s travels through the territory and maritorio of the Biobío region in Chile, from the Andes to the sea.