A revealing show at the Minnesota Center for Book Arts; Lyra Baroque’s Jacques Ogg is streaming a concert from the Netherlands 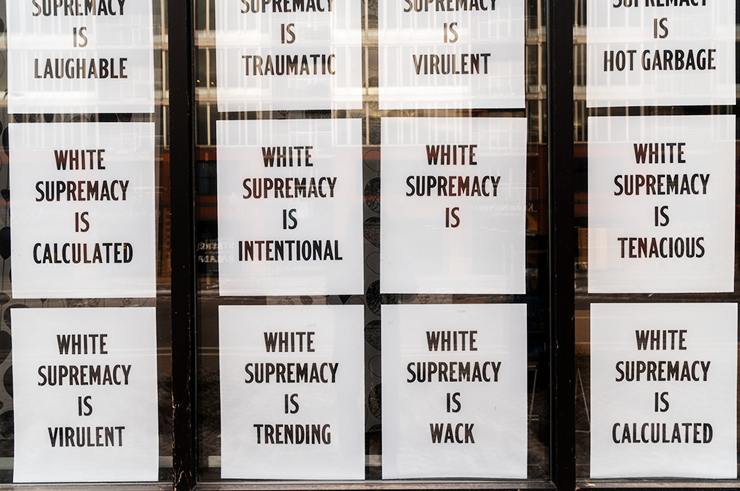 On Wednesday, Jan. 6, white supremacists were among those attacking the U.S. Capitol in Washington, D.C. The following Monday, 148 typographic posters were displayed in the windows of the Minnesota Center for Book Arts on Washington Ave. S. in Minneapolis, face out onto the street.

The moment, so close to the insurrection, was a coincidence. The posters are an installation by Ben Blount. A Detroit-born artist, designer, and typographic printer now based in Evanston, Illinois, Blount was part of a 2007 exhibit at the MCBA titled “We, Too, are Book Artists,” which featured works by black artists using the arts books to communicate. humanist responsibility, social justice, cultural awareness and spirituality. His artists’ books and prints are part of collections such as the Newberry Library and the Metropolitan Museum of Art.

“Ben was on our radar,” said Torey Erin, director of exhibitions and artist programs at the MCBA, speaking by phone Thursday afternoon. “He was slated for a live typography demo in December, and after seeing ‘Eyes Wide Shut’ on his website, and after the murder of George Floyd in Minneapolis, we felt it was necessary to show the work of Ben and to amplify his voice as a printer. We first talked about October, then it moved to January to align with the inauguration and Martin Luther King Day.

In an earlier version in Evanston, Blount’s “White Supremacy” posters filled the walls of a 10′ x 10′ room. An exterior window was covered with black paper, but people could peer through a horizontal opening into the room. Once inside, they were surrounded.

MCBA originally planned a similar approach for its small, street-facing Outlook gallery, but “things started to unfold,” Erin said. “There was a lot of anticipation during the election. We modified the exhibit to be directly on the windows of the Outlook gallery, then extended it to the windows of our paper studio and storefronts.

Stretching halfway up 18 street-level windows on the Open Book Building, “Eyes Wide Shut” makes a powerful statement in the age of the pandemic. We can’t enter Open Book, but we can’t miss the message when we pass by or drive.

“As we were setting up the exhibit, people were taking pictures, giving us thumbs up, pulling up in their cars and getting out to see it,” Erin said. “We had no idea it would be so timely. But we’re all in shock at what happened [on Jan. 6], and it was encouraging to see the positive response.

V is for virtual, L is for live and in person.

V Tonight (Friday, January 22), 7 p.m.: Twin Cities Film Fest Short Film Showcase. A one-time broadcast of six shorts with Minnesota connections, plus a virtual Q&A with some of the filmmakers. The program includes the Twin Cities premiere of “Ruth,” an Alex Rollins Berg film that reunites former Guthrie actors Lynn Cohen and Barbara Tirrell, who played mother and daughter in Chekhov’s “The Seagull” at the Guthrie in 1983 They are mother and daughter in “Ruth” as well. It was one of Cohen’s last performances; she died in February 2020. IMF and tickets ($9; free for TCFF members).

V Begins Tonight (Friday, January 22): The U’s Lifelong Learning and Park Square Theater: Jeffrey Hatcher: “Riddle Puzzle Plot”. When COVID prevented Park Square from performing its summer 2020 play, a Sherlock Holmes mystery by Jeffrey Hatcher, the theater did something that was still new at the time. It featured a four-part play, also by Hatcher, performed on Zoom. Returning to distract us from winter, “Riddle Puzzle Plot” is a witty and engaging story of a theater company stuck on an island during a pandemic. One by one, the members end up dead. But who is the killer? Directed by Warren C. Bowles, the cast is brilliant: Shanan Custer, Rudolfo Nieto, Aimee K. Bryant, Sun Mee Chomet, EJ Subkoviak, Pearce Bunting and Alesandra Bongiardina. And Hatcher loves the language. Each taped episode ends with conversations with theater folks and mystery experts; during the fifth episode, Hatcher and others discuss the production. Episodes will air on Fridays until February 19. IMF and registration ($20 for the series).

V Streaming Now: American Masters: Five Arts and Culture Documentaries. “How It Feels to Be Free” spotlights six African-American artists – Lena Horne, Abbey Lincoln, Nina Simone, Diahann Carroll, Cicely Tyson and Pam Grier – who challenged an entertainment industry that perpetuated racist stereotypes. “Laura Ingalls Wilder: Prairie to Page,” produced by TPT and WNET, is an updated, unvarnished look at the author of “Little House.” “Maya Angelou: And Still I Rise” features the fierce and prolific poet, memoirist, and civil rights activist (who, incidentally, wrote the poem for Bill Clinton’s inauguration in 1993). “Garry Winogrand: All Things Are Photographable” explores the life and work of the street photographer who influenced so many others, including Wing Young Huie. “Celebrating Bird: The Triumph of Charlie Parker” tells the story of the saxophonist and jazz composer who changed the course of music. Find them all here. To free.

V Saturday, January 23, 11 a.m.: Lyra Baroque: Jacques Ogg from Home: Cellebroederskapel in Maastricht, Netherlands. Lyra’s artistic director gives a solo harpsichord performance broadcast live from a 16th-century chapel where he practiced the organ as a youth. With music by Peter Philips, Frescobaldi, Froberger and Muffat. IMF and tickets ($15 adults/seniors, $5 students). The concert will be available until June 30.

V Saturday, January 23, 7 p.m.: Lakes Area Music Festival: “Beauty in Chaos, Hope in Order”. “Wild and fantastic music” from the 17th century, played on period instruments. Baroque violinist and historical performance scholar Chloe Fedor curated the concert, a performance with Kieran Campbell (cello), Adam Cockerham (theorbo and baroque guitar) and Elliot Figg (harpsichord). With selections from Biber, Kapsberger, Mealli, Fiore, Matteis, Corelli and Orlando Gibbons. Pre-recorded and free on Facebook. IMF, including the schedule, a link to a historical performance conference, and a link to a Q&A coffee with Fedor at 10 a.m. that day.

V Tuesday, January 26, 5:30 p.m.: Rain Taxi: translator Damion Searls discusses Rilke’s “Letters to a Young Poet”. Adored by poets and creators of all disciplines, Rainer Maria Rilke’s “Letters to a Young Poet” was first published in 1929 and remains one of his most popular works. Searls’ latest book is a new translation that also includes the letters that the young poet, Franz Xaver Kappus, wrote to Rilke. Searls will be in conversation with Eric Lorberer, editor of Rain Taxi Review of Books. Free, registration required.