A futuristic vision with a nostalgic twist 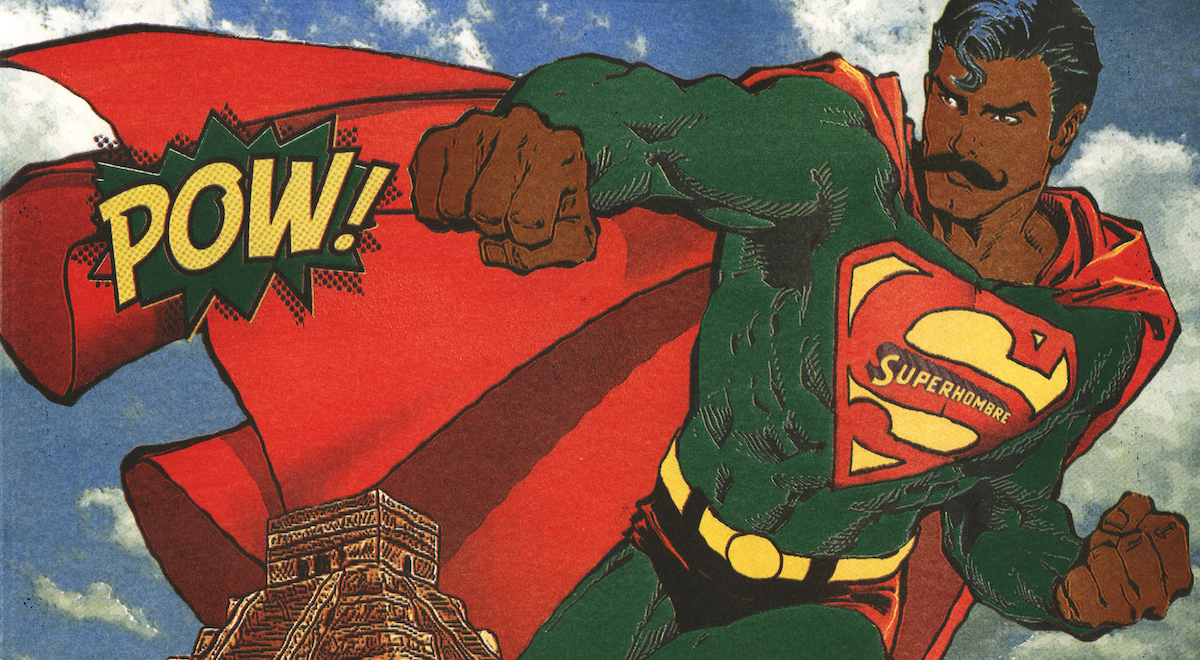 ALBUQUERQUE — Fronteras del Futuro: Art in New Mexico and Beyond at the National Hispanic Cultural Center (NHCC) in Albuquerque explores contemporary issues related to the border state and similar multicultural regions through works of art that draw on science, technology, fantasy, personal stories and cultural identities. The exhibit draws on speculative fiction, which is evident in the way many of its 31 artists (who are primarily based in or have ties to New Mexico) tap into the properties of pop culture for critical commentary. .

“Listening” (2018), photomontage on aluminum by Ehren Kee Natay (Navajo), sets the tone for Fronteras del Futuro. The artist, dressed as a member of the Star Trek crew, is inserted into a historical photo (circa 1958) of his grandfather, Ed Lee Natay, who wears a Western button-up shirt and a headband tied at the side. The couple sit side by side listening to the 1958 record Natay, Navajo singer, the first commercial album recorded by a Native American musician. The artist explains that, although he is a member of the Navajo Nation, growing up disconnected from the Diné culture gave him the desire to “understand what knowledge and what wisdom has been lost” because of the forced assimilation of indigenous peoples. . He says contemporary technology has allowed him to connect to that past. An intelligent curatorial choice to offer this work as an introduction; themes of cultural identity lost and found, assaulted and protected continue throughout the show.

Three prints by Chicano artist Tony Ortega are on display, two of which could be mistaken for enlarged panels of wonder woman and Superman comic books. On closer inspection, Diana Prince has been replaced by the iconic Frida Kahlo, and Superman is now “Super Hombre” (2015) with dark skin and a Pancho Villa mustache. The two heroic figures hover, ready for action, in front a Mayan pyramid. The third print, “Mickey Muerto at Teotihuacan” (2017), presents a less heroic image. The eponymous mouse, depicted as a José Guadalupe Posada-style calavera, nudges a tourist photo op in front of the Teotihuacan Moon Pyramid, which became the base of Cinderella’s Castle. This hard-to-miss metaphor speaks to the commercialization of Indigenous spaces where ancient sites, like Teotihuacan which is surrounded by restaurants and hotels, have become theme parks.

Mickey Mouse and Superman make several appearances alongside characters from other American and Mexican comics in the exhibition highlight, “Codex Espangliensis from Columbus to Border Patrol” (1999), a collaborative work by Enrique Chagoya and Guillermo Gómez-Peña, both born in Mexico City and currently based in San Francisco, designed in collaboration with book artist Felicia Rice. This accordion-folded, typographic book is inspired by pre-conquest Mesoamerican codices. It is a critical epistolary that brilliantly combines pop culture, ancient Indigenous imagery and colonial European prints with texts in English, Spanish and Nahuatl. Diligent in its message and conception, “Codex Espangliensis” presents an episodic narrative explaining the complexities of the history of the Americas.

Another round of sci-fi and fantasy references appear in the acrylic-on-canvas paintings of Albuquerque resident Ryan Singer (Navajo) depicting scenes “where the worlds of Star Wars and Navajoland collide. “. Growing up in northern Arizona, Singer spent summers herding her grandmother’s sheep in a desert landscape reminiscent of Tatooine. In “Rainbow Flavor” (2021), memory and fantasy collide as a pair of Jawas and an R5 astromech line up alongside locals at a food truck offering fry bread and sno-cones. “Land Back” is scrawled on one side of the truck, a movement slogan focused on “recovering all that was stolen from the original peoples”.

Laura Alvarez’s serigraph “The Double Agent Sirvienta: Blow Up the Hard Drive” (1999) features the artist’s spy character who disguises herself as a servant to collect sensitive information from her clients, subverting the image of the good Latinx by placing her in a position of power (Alvarez is currently developing a graphic novel about the character). Across the gallery is comic artist and political cartoonist, Eric J. Garcia’s ‘Tamale Man’ (2005) lithograph. Searching for a comic book character relevant to his cultural background, Garcia created the anthropomorphic “marvel of the masa” to humorously address real-world sociopolitical issues. In a similar light-hearted but critical spirit, Angel Cabrales’ posters for his imagined B-movie series “It Came from Beyond the Border” satirize politicized phrases like “illegal aliens” as crowds cower under the threat of flying conchas.

Other works in the exhibition combine traditional Latin art forms with contemporary materials and ideas, such as Marion Martinez’s sacred hearts of circuit boards or Patrick McGrath Muniz’s media-critical retablo “Divinus Informer”. Nikesha Breeze’s haunting dual-channel video “Stages of Tectonic Blackness: Blackdom” (2021) explores queer black resistance through movement, music and mourning rituals. This serves as a reminder that while New Mexico is often characterized as a tricultural state (White European, Hispanic, Indigenous), it is actually a multicultural mosaic with a large population of creative practitioners.